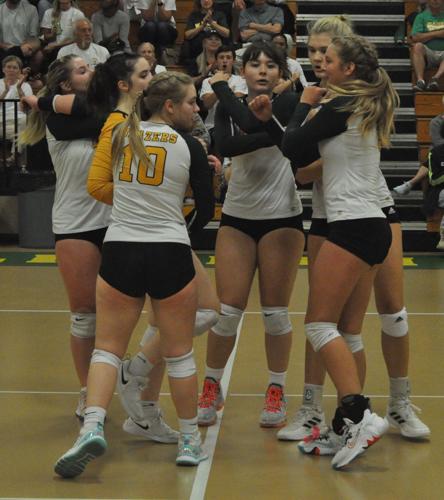 Members of the University Heights Lady Blazers volleyball team celebrate a point against the Christian County Lady Colonels Thursday night in their 3-1 victory. 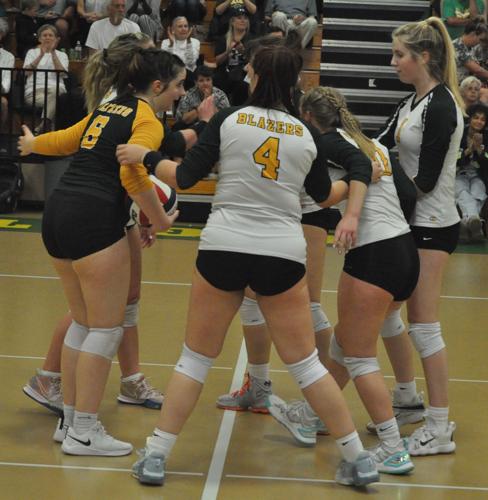 Members of the University Heights Lady Blazers volleyball team come together in a huddle during their game against the Christian County Lady Colonels Thursday night.

Members of the University Heights Lady Blazers volleyball team celebrate a point against the Christian County Lady Colonels Thursday night in their 3-1 victory.

Members of the University Heights Lady Blazers volleyball team come together in a huddle during their game against the Christian County Lady Colonels Thursday night.

The University Heights Lady Blazers won three sets to one against the Lady Colonels Thursday night, where they celebrated their seniors before the varsity match.

Lady Blazers head coach Faye Hendricks spoke on the team’s performance against Christian County and what it meant for them after the loss to Todd Central last week and going into the rest of the season.

“I feel like only playing on Thursdays the last two weeks we haven’t had too many games and I think that kind of hurt us some,” Hendricks said. “But they have had two hard fought matches, we had all week to try to prepare for County and they gave us a really hard match, they kind of played out of their skulls for the first two and then kind of lost their steam.”

Hendricks said they just had to keep fighting and work through it, that they started heavy and then found themselves.

“We were trying to prepare for what we thought their offense was going to be, but honestly, we didn’t execute on a lot of that very well, but great to get a great match from County to help us prepare for All “A” this weekend,” Hendricks said.

Hendricks thought that dropping a set against the Lady Colonels really gave them some resilience with how they dug out of that. She said they’re still trying to build that winning culture and that they need to come out of tough matches like they had against Christian County on top.

“It’s really comforting to know that we can play mediocre in the beginning and then pick it up and really turn it around,” Hendricks said.

After their game Thursday night, the Lady Blazers traveled to EKU for the All “A” tournament for two games, including one today at 8:30 a.m. against Somerset Christian School. After that, the Lady Blazers next scheduled game will be Sept. 20 at Madisonville-North Hopkins with a scheduled start time of 7 p.m. The Lady Colonels next game is today at home at 12 p.m. in the first of two crosstown rivalry matches with the Hopkinsville Lady Tigers.