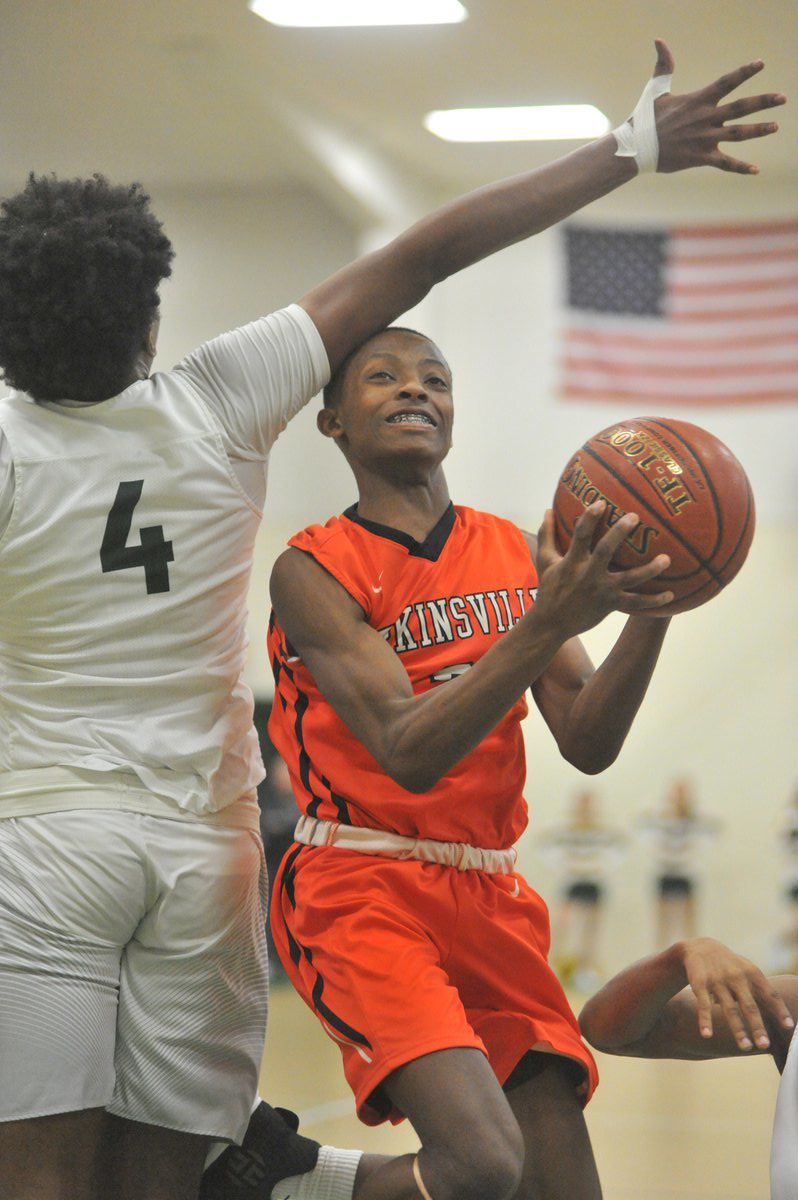 Hopkinsville's Arthur McKnight drives the lane during the Tigers' loss Friday at UHA. 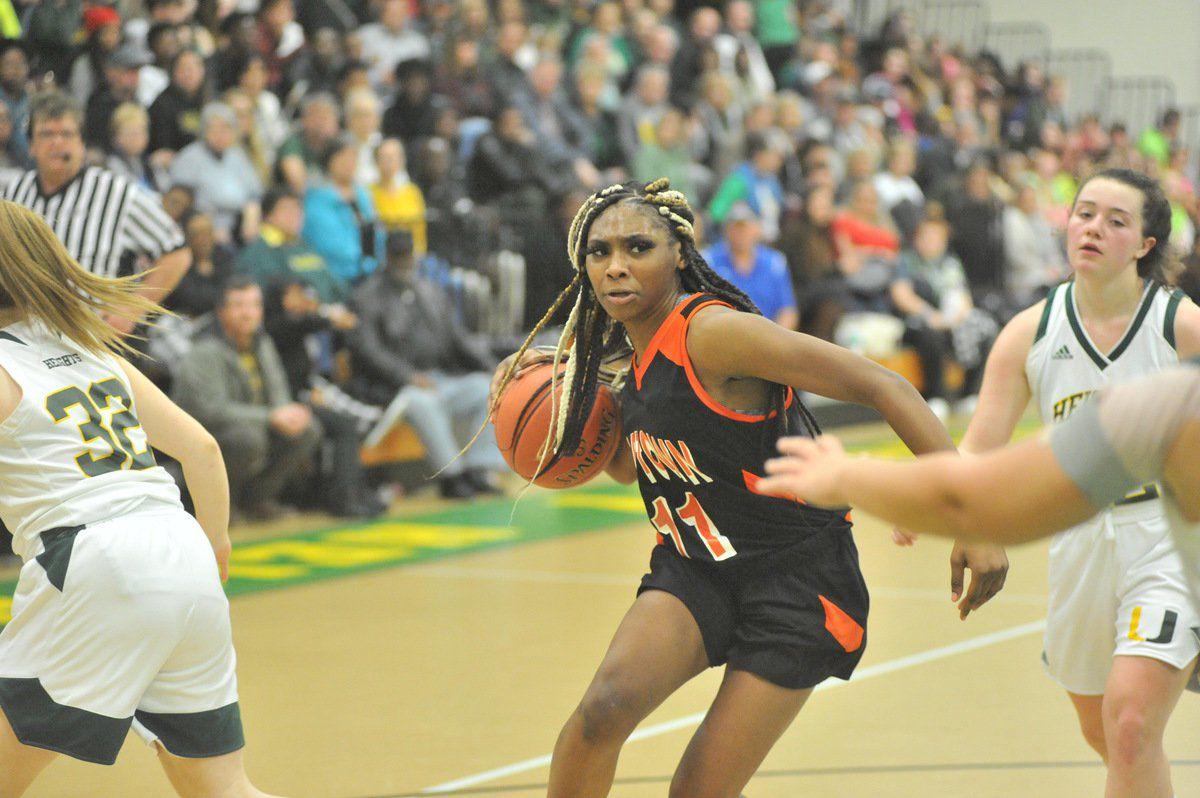 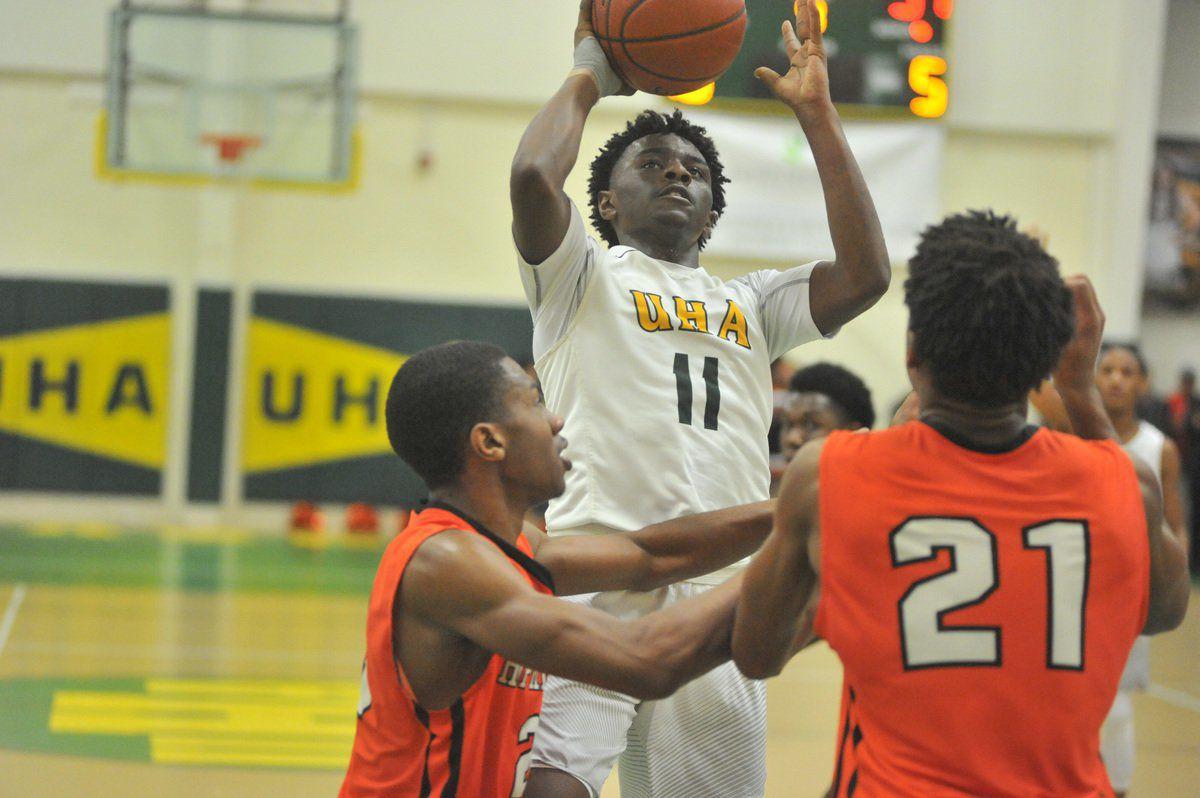 University Heights Academy DJ Quarles (11) puts up a shot during the Blazers' win over Hopkinsville Friday at UHA.

Hopkinsville's Arthur McKnight drives the lane during the Tigers' loss Friday at UHA.

University Heights Academy DJ Quarles (11) puts up a shot during the Blazers' win over Hopkinsville Friday at UHA.

Hopkinsville and University Heights Academy met Friday inside Blazer Gym for a battle with huge Eighth District implications and while the Lady Tigers cruised in their game, the boys' game was a different story.

The Blazers needed overtime to take down Hopkinsville, 71-66, as the Hoptown girls' team beat UHA, 48-23.

Coming into this week, some may have said the UHA Blazers were the third-best team in the city, but now that the week is over, the Blazers have solidified their top spot atop the Eighth District standings after taking down Christian County and Hopkinsville in a four-day span.

"That's a good place to be," UHA coach Grant Shouse said of their current top ranking in the district. "Credit Hoptown, I thought they came in and really played us very tough. Got good leapers around the basket, we struggled with the rebounding a little bit early.

"I thought they kept coming at us. I thought we were very fortunate to win. I thought we stuck around and made enough plays to pull one out, maybe when we shouldn't have. I like our effort and the fact that we didn't give up."

Both teams came out firing in the first frame as UHA held a tight 13-12 lead after the first. The Blazers would go on a run and take a 30-26 lead at the break, but the game was just getting started.

With a two-point lead, the Blazers went into fourth quarter with a little momentum but the Tigers were quick to snuff it out. With 2:41 left in the fourth, Hoptown had a 60-55 lead, but they'd be outscored 16-6 in the rest of the period, including overtime.

Hoptown had a chance to win it with seconds to go in the fourth but an errant pass gave the Blazers a chance that they eventually missed at the buzzer.

The overtime was all UHA as the Tigers struggled mightily at the charity stripe.

DJ Quarles finished with 20 points to lead all Blazer scorers as Amani McGee (19) and KJ Crump (12) also finished in double digits for the Blazers.

Anytime a team beats a rival by 27 points, there's a possibility of a hangover, but that wasn't the case for the Blazers.

"After the performance we had Tuesday night, it's very difficult to match that," he said. "We made a lot of shots, we didn't make some shots here early. Changed our body language a little bit, that's what I was kind of concerned about. Anytime you can gut-check one out and get it into overtime and pull it out against all odds."

Arthur McKnight also finished with 20 to lead the Tigers as Don Victor (17) and Reece Jesse (12) also had big games for the Tigers.

Both teams are in action today at the Toyota of Hopkinsville Shootout at Christian County with Hopkinsville and Lyon County taking the court at 2 p.m. followed by UHA and Northeast (TN) at 4 p.m.

The Hopkinsville Lady Tigers had a performance to forget Tuesday against Madisonville-North Hopkins but they came to play Friday as they solidified their No. 2 spot in the district iwth a 48-23 win over UHA.

"Not let one turn into two," he said was his gameplan. "As far as the effort, we talked about getting the 50-50 balls, playing with heart, playing with Tiger pride. Just go out there and have fun. We played a little bit too relaxed. Madisonville is number one in the region, we should have came out more focused and more ready to play."

Shaterrea Bellamy led the Tigers with 15 points but Donnisha Flowers finished with six points, all in the second half, as it was her first time scoring this week.

Flowers was held scoreless Tuesday and during the first half Friday.

"Second half, she was moving without the ball," he said. "We can't stand, we can't be stationary. Sometimes we stand a lot and we watch. I tell them 'don't take pictures, play the game.' Sometimes we get in the habit of standing and watching people."

Both teams struggled offensively in the early part of the game but it was Hoptown that held a 18-13 lead at the break. UHA could only muster 10 points in the second half as the Lady Tigers ran away with the game.

Aniah Daily led the Lady Blazers with five points as she scored all five of her points in the first few minutes of the game.

Like the boys, both teams are in action today, but both are on the road. Hoptown takes on Caldwell County while UHA plays at Daviess County.