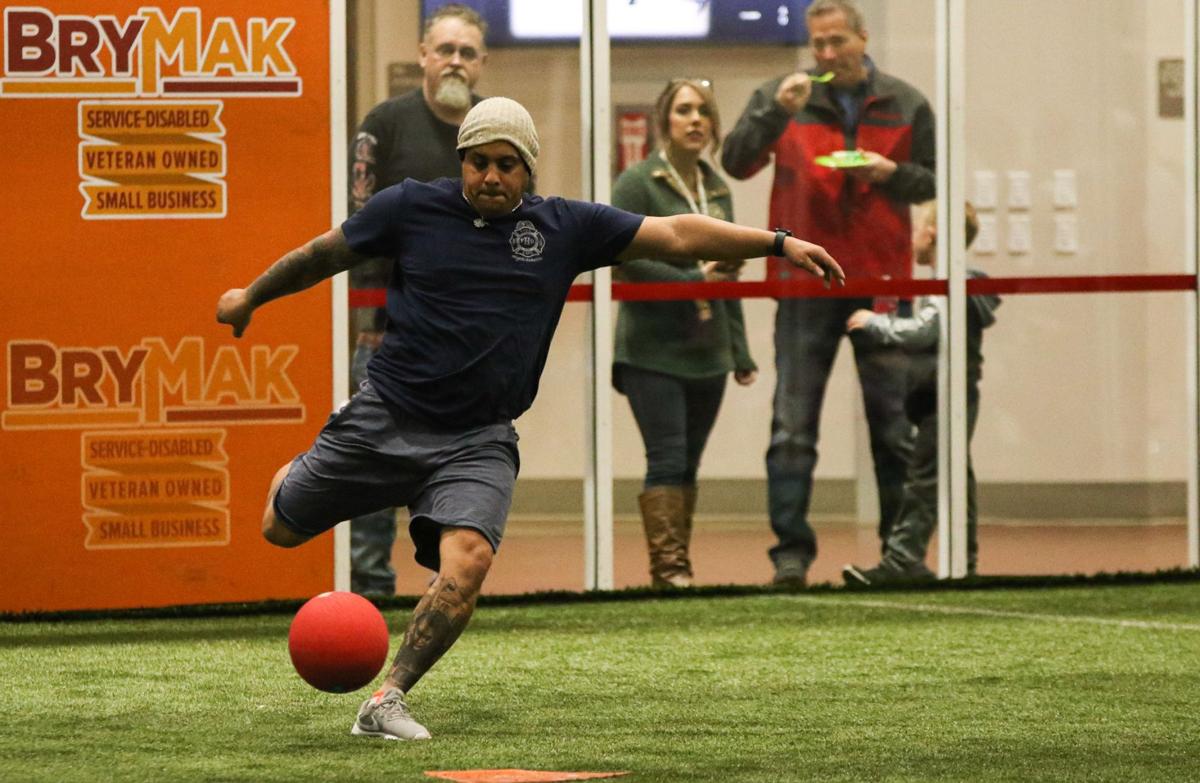 Members of the Hopkinsville and Fort Campbell Fire Departments pose for a photo after playing kickball against one another at the Planter's Band-Jennie Stuart Health Sportsplex Hopkinsville as the facility celebrated its one-year anniversary on Thursday night. 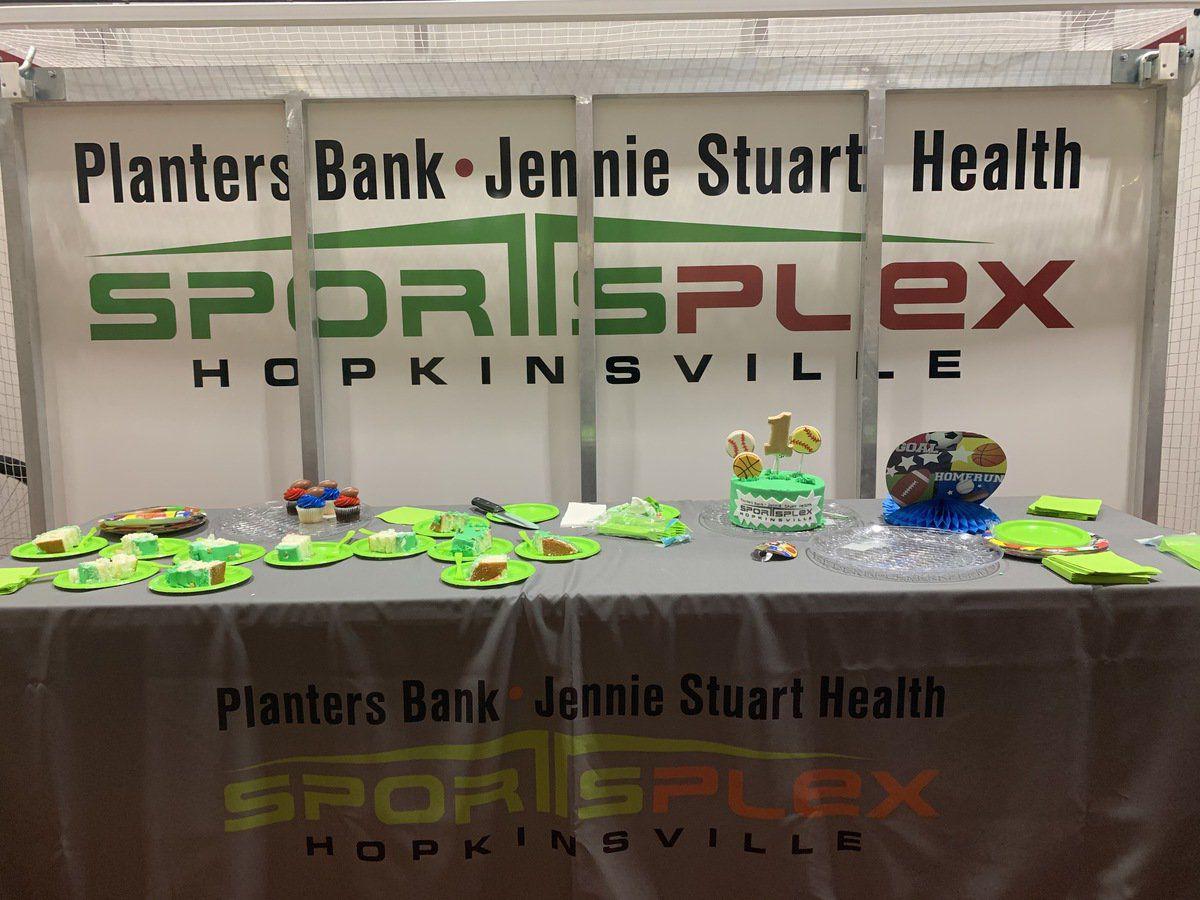 Members of the Hopkinsville and Fort Campbell Fire Departments pose for a photo after playing kickball against one another at the Planter's Band-Jennie Stuart Health Sportsplex Hopkinsville as the facility celebrated its one-year anniversary on Thursday night.

One year ago, the Planter's Bank-Jennie Stuart Health Sportsplex Hopkinsville opened its doors, creating a path for the community to interact in a way it hadn't done before.

Thursday night, the "PB&J Plex" celebrated its first anniversary in the only way it could, allowing organizations within the Hopkinsville and surrounding areas to participate in some friendly competition.

For the first time in the Sportsplex, the turf field was used for some kickball. The Hopkinsville Fire Department brought over the Fort Campbell Fire Department to compete against one another in the "Battle of the Brigades" and provide entertainment for all in attendance.

FCFD won the game 14-10, but both sides enjoyed themselves from start to finish.

"Chris (Jung) reached out to us and told us it was the one-year anniversary," HFD Chief Steven Futrell said. "Of course, we were super excited to be involved with that. They do so much for the community. We reached out to Fort Campbell and thought about doing a couple different things and kickball got brought up and we all thought it'd be a good idea. All the guys had a good time, nobody got hurt so it was just a friendly game."

Marketing and Events Director Chris Jung said the Sportsplex has hosted many unorthodox events in the building, and now kickball has added on to that list.

"We had not done a kickball game on this field. But it really is in-line with our motto from year one which is, 'we're willing to try anything once,' " Jung said. "When they told us they wanted to do kickball, we said let's make it happen."

Jung added saying he hopes to use the facility to do more events like the fire department showdown in the future.

"I believe that we will see kickball and games like this with police departments, fire

departments, first responders, factory workers -- across the board, they're going to be here to participate in events like that," Jung said. "It's going to be a thing that continues for sure."

In the last year, the Sportsplex has hosted many events from indoor soccer leagues all the way to cornhole tournaments and has definitely paid its dividends.

Jung said from a revenue perspective, the Sportsplex has exceeded expectations in year one.

"When you talk about the attendance we've had -- we're over 100,000 visitors in one year," Jung said. "Revenue wise -- this is an approximate number -- but we're going to hit somewhere around $330,000 in revenue, which was more than the projected amount."

Jung said the Sportsplex has brought a big return of investment to the Hopkinsville community, particularly for the businesses in the city.

"You're talking about 33 different local businesses that have sponsored the building -- they're bought in," Jung said. "(The) economic impact -- in terms of what we're creating -- which was the original goal of this place which was to create and generate sports tourism dollars -- that's going to be in the millions when you talk about hotel rooms, restaurants, shopping, gas ... The return on investment has been good."

Futrell said the Sportsplex has been a phenomenal addition to the community and sees the future to be very bright for the facility.

"We've been here for hours and there are still people here," Futrell said. "(There are) teams practicing. There were teams practicing when we got here. The parking lot's full every single night. It's just a huge benefit to our community and to our city."

But 2019 is just the beginning according to Jung.

With all the things the building has hosted and eyes it has attracted to the city of Hopkinsville, Jung said the success they've seen in the past year can hopefully pave the way to even more success in year two and beyond.

"We really capitalized on the turf field with our indoor soccer leagues," he said. "We about to start our fifth season of indoor soccer next week. We have 40 teams signed up, which is a record, which is awesome. But we want to see the same type of success for Sportsplex-run basketball leagues, volleyball leagues (and) archery. We really want to use the model that we've organically created with soccer and apply that to sports on the other side of the facility and make sure that anybody that is in town that wants an affordable experience and a top-notch, first-class facility has the chance to do it."

While the financial side is what a lot of people use to gauge the success of a business or a facility, Jung said it's providing something the community that can be proud of that really defines it for him.

"The thing that's more important the Sportsplex has done is changing the culture of this community," Jung said. "It's getting some of the naysayers to believe that we can have robust and significant facilities like this one. There are bigger things that can be done when we work together as a community. People can get excited, we can give them something to do. Our young people now have an outlet where they can come and be active.

"More than even the financial goals that we've hit, we are happy to see that people thinking a little bit differently when you talk about the culture of Hoptown and what we have done in the past and what we can do in the future. I feel like we're a big part of that and can hopefully provide hope for the entire community."