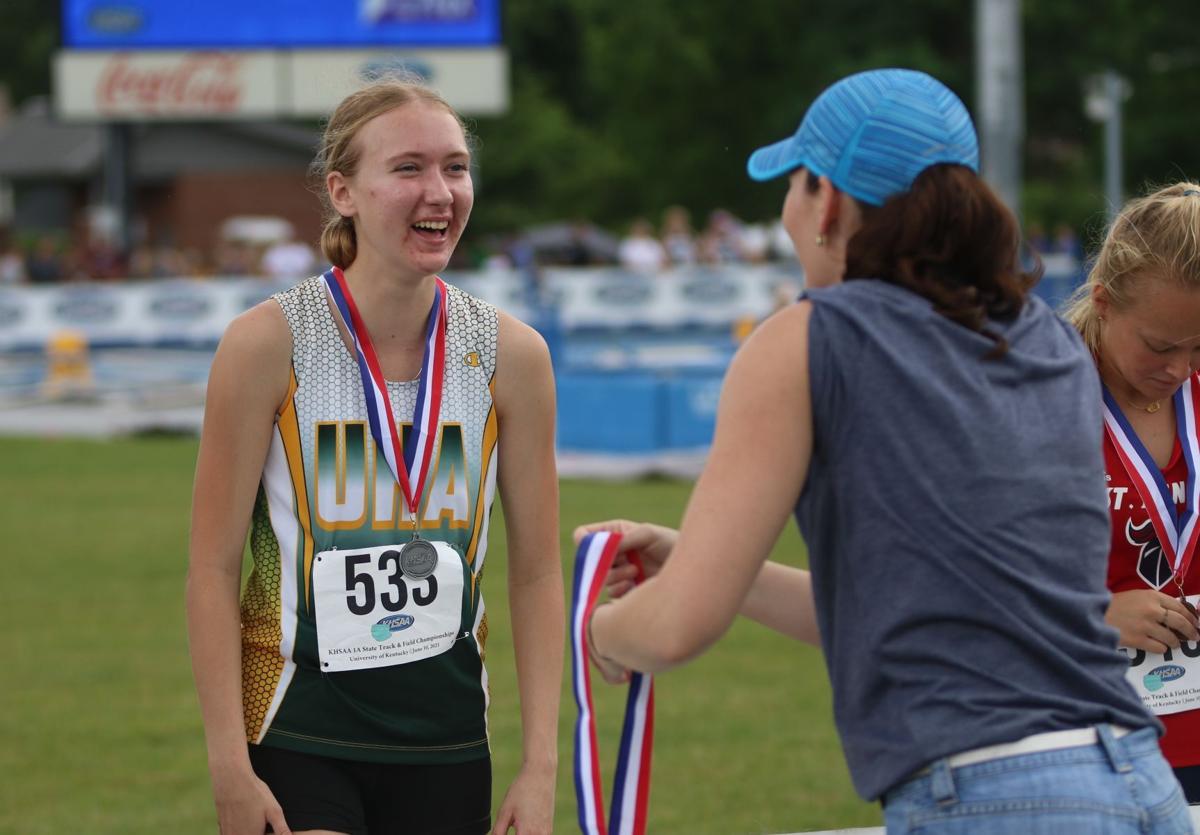 University Heights Academy’s Evelyn Morales smiles as she receives her second-place medal in the 100-meter hurdles on Thursday at the state track meet in Lexington. 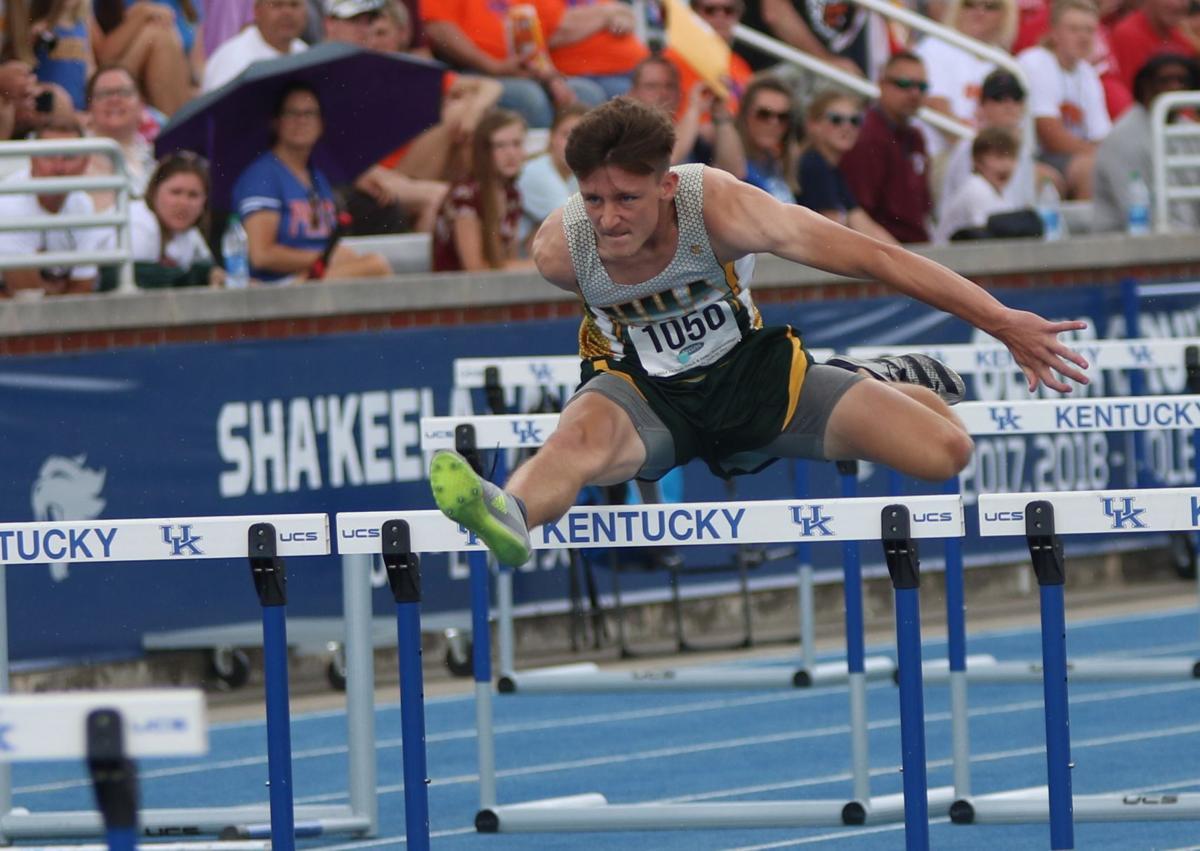 University Heights Academy’s Connor Dill leaps over a hurdle during the 110-meter hurdle race on Thursday. 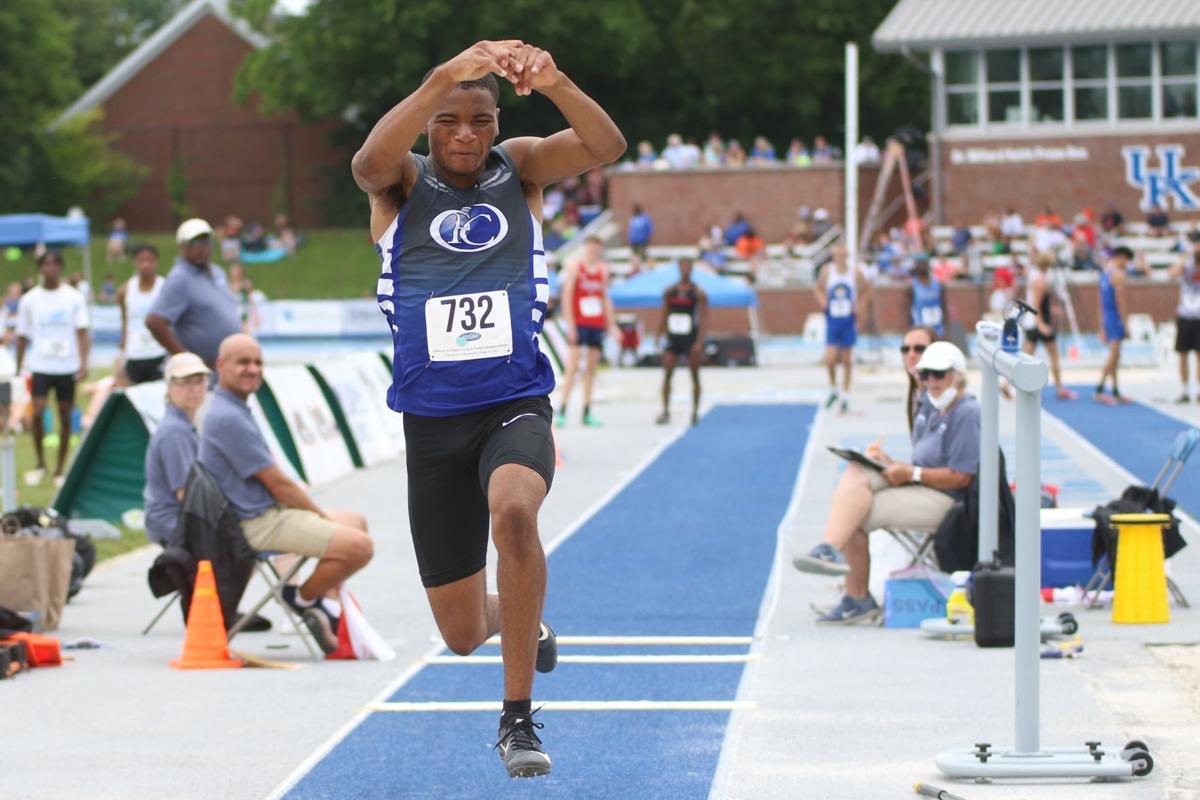 Fort Campbell’s Jeremiah Holley leaps during the triple jump on Thursday in Lexington.

University Heights Academy’s Evelyn Morales smiles as she receives her second-place medal in the 100-meter hurdles on Thursday at the state track meet in Lexington.

University Heights Academy’s Connor Dill leaps over a hurdle during the 110-meter hurdle race on Thursday.

Fort Campbell’s Jeremiah Holley leaps during the triple jump on Thursday in Lexington.

University Heights Academy scored like a team larger than it is on Thursday in Lexington.

The small group took it to the state track and field meet, finishing in the top 15 in both overall team totals (11th in girls, 12th in boys).

Headlined by hurdlers Evelyn Morales and Connor Dill on the day were the Blazers, as Morales posted two second-place finishes in the 100 and 300-meter hurdles and Dill secured second in the 300-meter hurdle.

Coming into the meet, Morales had a goal of breaking the 16-second mark in the 100 hurdles and she did just that by running a 15.90 race, finishing behind a Class-A state record from Morgan County’s Krista Perry.

“I didn’t look up at the scoreboard (when I finished),” Morales said. “I waited and I went back to the tent and my dad told me that a ran a 15.90. I was kind of shocked. I felt like I was going to PR because I was really working on my form a couple days earlier and it felt solid and I worked out a big stutter.”

Morales finished behind Perry in the 300 as well and said overall she was pleased with her individual performance on the day.

“I feel pretty good about my time in the 100,” Morales said. “In the 300, it was a little bit bittersweet. I am glad to have gotten second but I also think that with my form I could’ve performed a little bit better. Overall, I did what I needed to do on the track.”

Morales also made the podium in her two relay races on the day, as she finished sixth in both the 4x200 and 4x400-meter relays.

For Dill, it was all about bouncing back.

After a performance in the 110-meter hurdles that he wasn’t too happy about, he stayed focused for the 300 and pulled out a second-place finish after being seeded fifth for the event.

“Knowing I could do better, that drove me,” Dill said. “I didn’t want to get beat by those guys again. I just had to go out and try my best.”

Dill finished sixth in the 110 prior to his second-place performance.

The junior was also a part of a school-record-setting performance in the 4x400-meter relay.

UHA’s fourth-place finish in the race was the next-highest finish behind the second-places from both Dill and Morales.

There was another school record set for the Blazers and there was one thing in common about that race and the 4x400.

Senior Tomas Duncan ran on it.

Duncan was a part of not only the record-setting performance in the 4x400, but in the 4x800 as well at the start of the day.

UHA took fifth in that race, but all four set split PRs and beat the school record by over 10 seconds.

Now set on going to Coastal Carolina, Duncan said he was happy with how he put a close on his high school career.

“I’m pleased with how I did, I’m just glad I walked away with medals and everything,” Duncan said. “My team exceeded expectations in the relays and they ran hard.

“I think the 4x800 threw me off a little bit. I pushed so hard because my brother is in it. I was pushing for them. I think it kept me from being 100% in my other races, but I’m happy with how it went.”

Fort Campbell, one half of the 2021 Region One champions, had a solid day as well.

The Falcons got a pair of top finishes from Jeremiah Holley as he finished sixth in both the long and triple jumps. Holley was also a part of the boys’ 4x100 relay team that took home fifth on the day.

FC finished 22nd overall in boys’ total score with 22 points. The girls didn’t register a point on the day.

Life in the Red: A four-star, late-June official visitor for the Huskers