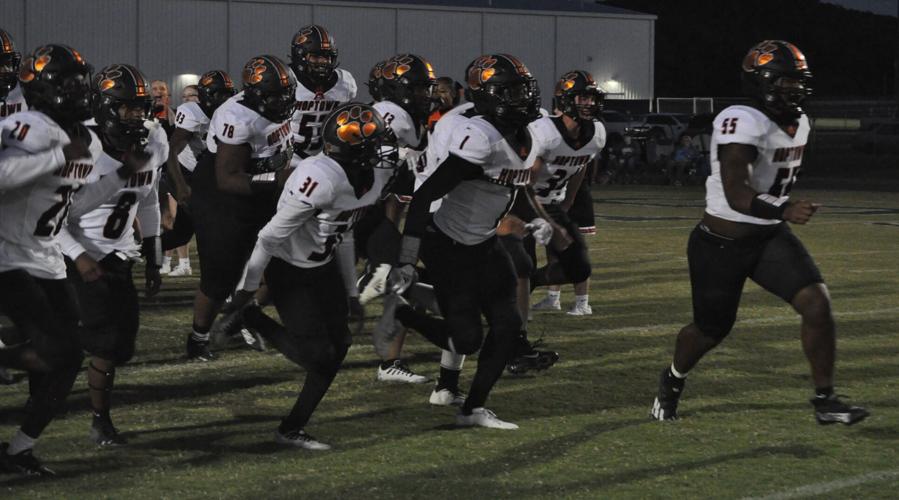 The Hopkinsville Tigers will be in a district with Allen County-Scottsville, Calloway County, Logan County, Paducah Tilghman and Warren East next season.

The Hopkinsville Tigers will be in a district with Allen County-Scottsville, Calloway County, Logan County, Paducah Tilghman and Warren East next season.

The KHSAA has finalized the realignment of football districts ahead of next season.

In Hopkinsville, the Tigers will see changes in their Class 4A district with new competition. Their district will include Allen County-Scottsville, Calloway County, Logan County, Paducah Tilghman and Warren East. While Hopkinsville is picking up two new opponents, they lost Hopkins County Central and Madisonville. Tigers’ head coach Marc Clark said right now they’re just trying to build up their program prove their accountability. He also noted that with this new district, the playoff opponents will stretch a bit further now. He also said that it’ll make every week super competitive and that while four teams will make the playoffs, there’ll be two sitting at home.

“You better be at your best every week,” Clark said.

The Christian County Colonels meanwhile will be moving up to Class 6A, where they’ll see new opponents in Daviess County, Henderson County and McCracken County.

Interim coach Zach Self talked about the change and what it means for the team.

“I think that change can always be a great thing, sometimes scary, but often comes with great rewards,” Self said.

Self said that with the program moving forward, it has a great advantage where they can prove themselves in a new district environment.

“With new challenges comes new rewards, and we look forward to pursuing those opportunities.”

At the 3A level, there’s Trigg County which will see changes to its district. Their district will now include Hancock County, Hopkins County Central, McLean County, Union County and Webster County. With three new faces the Wildcats, their number of important district games will increase.

“It’s a different dynamic, but yeah, excited,” Trigg County head coach Chris Ezell said. “We just have to focus on us and keep getting better here and then see what happens.”

Ezell said they talked about it during weightlifting the other day and how they just have to take things one day at a time. He said there’ll be some teams that’ll be ready to compete and that they just have to be prepared.

“It’s a new opportunity, new year, new teams,” Ezell said. “We just have to make sure that we’re preparing this offseason to do well during the season, but we’ve got some solid returning guys.”

He said the realignment is good because it makes sure that you’re keeping the right populated schools enrollment wise as close as possible.

“It’s exciting times, I think that it could be fun,” Ezell said.

Two area schools at the Class 2A level are Todd County and Fort Campbell. There’ll be two other schools in their district this season with Edmonson County and Owensboro Catholic. Todd Central Rebels head coach Josh Robins said they’re going to work on being the best team they can. The Rebels and Falcons lost three opponents in McLean County, Butler County and Hancock County. Robins said it’ll definitely be a lot different with them gone, but that they’ll still play McLean during the regular season. But he said they’re also looking forward to playing somebody different.