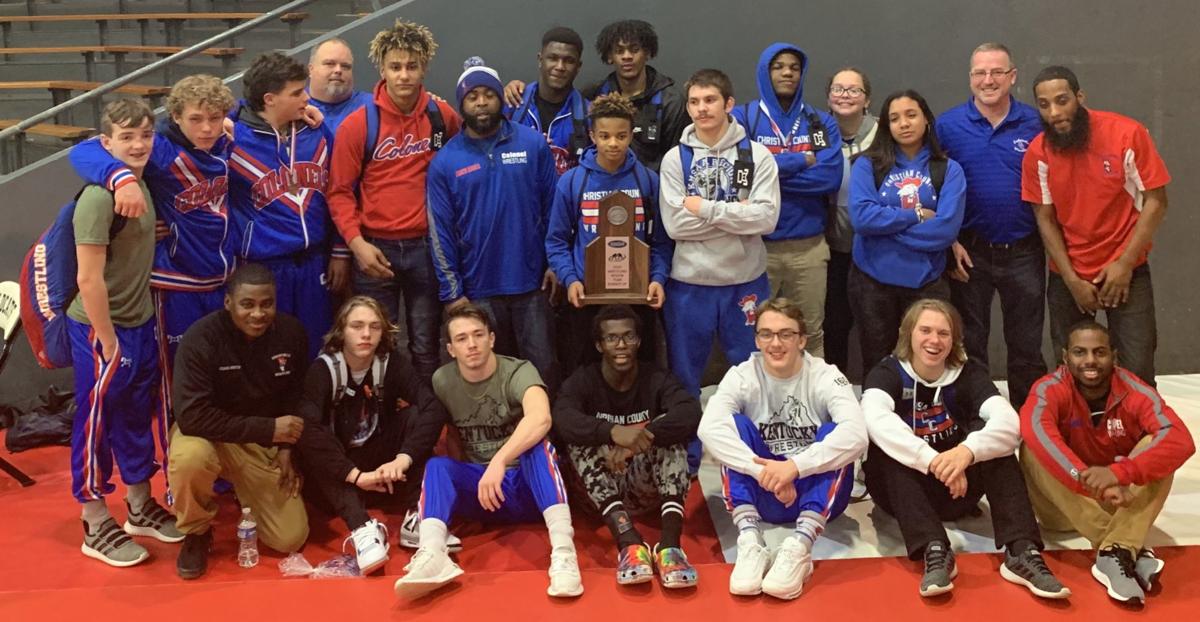 Christian County holds its runners-up trophy after the Region One Wrestling Tournament on Saturday at Trigg County. 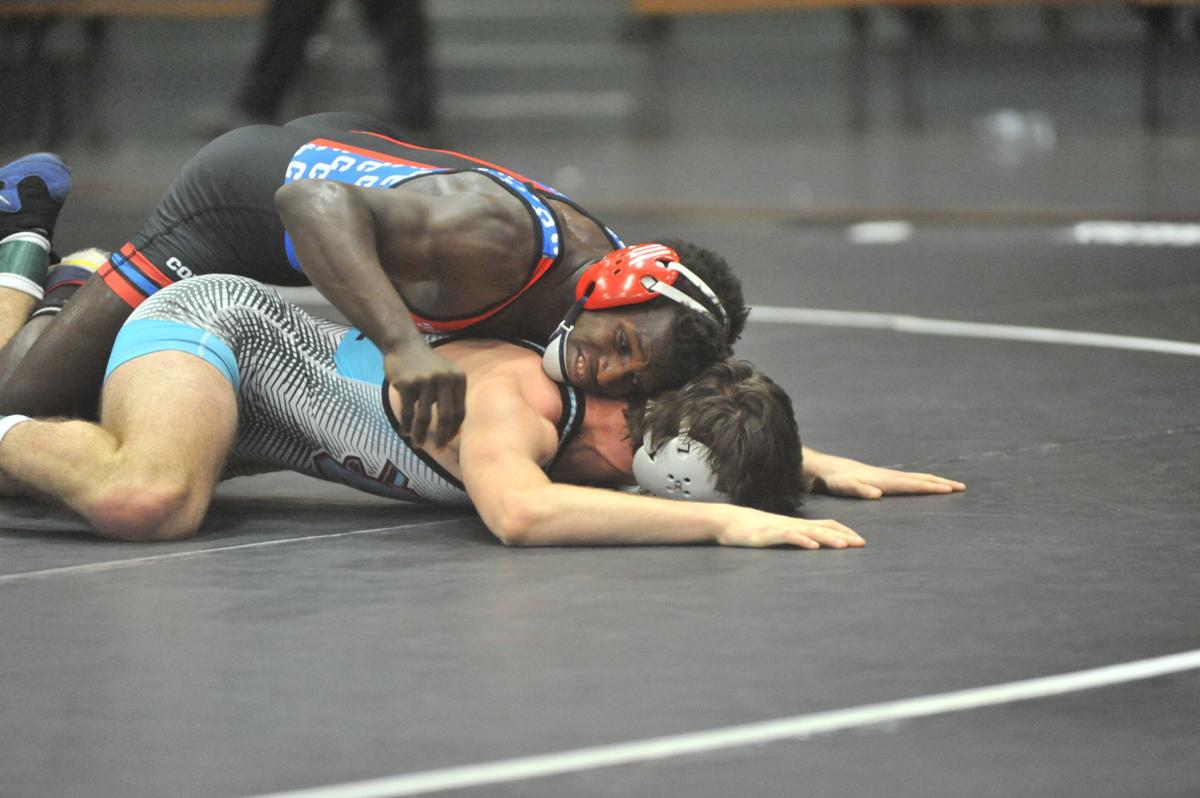 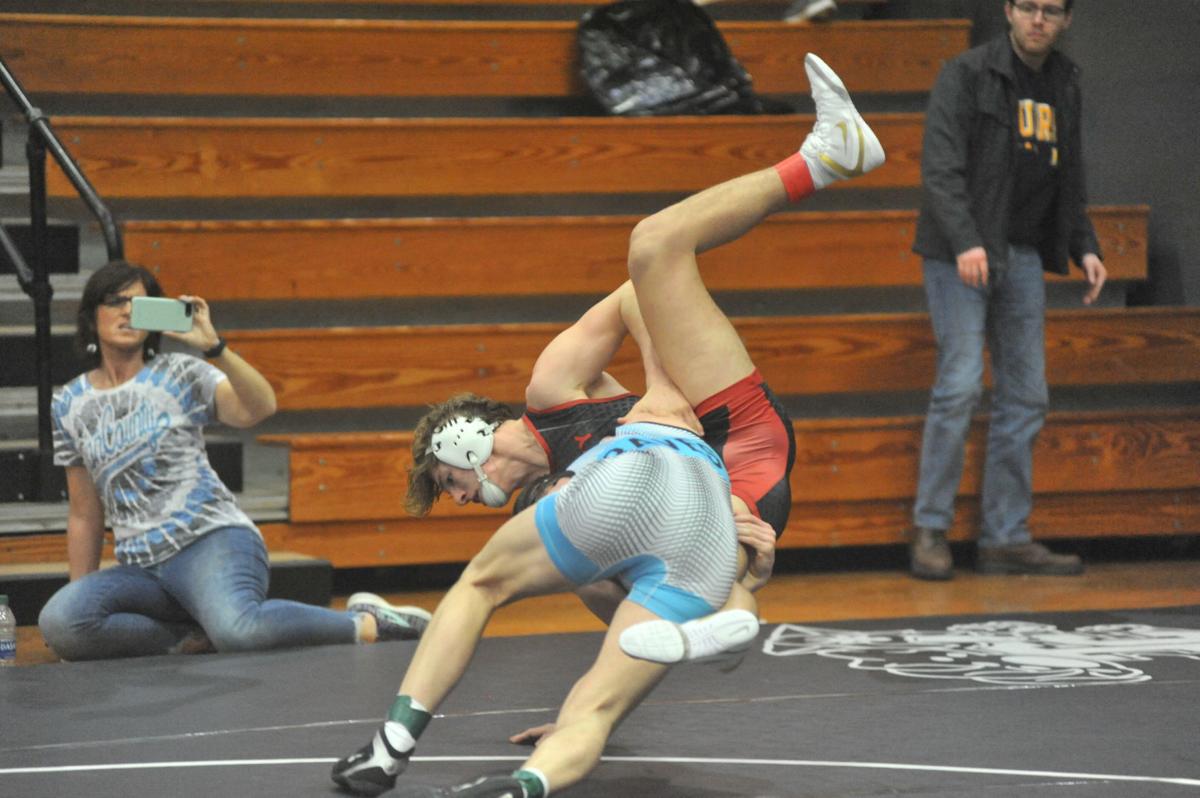 Trigg County’s Colin Stevens gets taken down during his finals match Saturday at TCHS.

Christian County holds its runners-up trophy after the Region One Wrestling Tournament on Saturday at Trigg County.

Trigg County’s Colin Stevens gets taken down during his finals match Saturday at TCHS.

Trigg County welcomed some of the top wrestlers in western Kentucky Saturday for the Region One Wrestling Tournament where several area athletes advanced to this weekend’s state tournament in Lexington.

Christian County finished runner-up to Union County as the Colonels had the only local champions in Jakerion Merritt (145) and Niko Bussell (220).

Colonel coach Robert Burnham said they need to wrestle without any mistakes if they want to dethrone Union County in Lexington as the Braves have won four-straight state titles.

“You have to be perfect and we’re not there yet,” he said. “But we still have every opportunity. We’re taking 11 to state, 11 tough wrestlers to state. I feel like we have a great chance to do as much damage as possible because all 11 are third place or better.

Merritt entered the weekend as the top wrestler in his class and he left the gym in that exact same position. The Colonel senior is now 32-0 after taking down Union’s Trevor Pogue but said his mindset isn’t different after winning a state title last season.

Merritt knew he’d likely face Pogue Saturday and he could face him again in Lexington if they each get to the finals.

Merritt said he and Pogue are a little too familiar with each other and added it doesn’t give him an advantage that he knows his opponent so well.

“It actually scares me,” he said. “The more we know each other, the closer the matches could be. They shouldn’t be close but they could be close.”

With two champions and a runners-up finish, Merritt said the team still has room to grow.

“I’d say we all performed at like a seven,” he said. “We all could have improved. We all could have done way better but it’s only going to help us out in the long run. Next week’s a little bit different, have a little more help at the state tournament from other teams. I still think we can pull off the 2020 state championship.”

Bussell was the other Colonel to win a title Saturday and after a second-place finish a year ago at the state tournament, he’s had something to prove all year.

“I wanted to come in here and dominate state,” he said. “Show people I should have won last year.”

Bussell said he needs to work on takedowns and if he can do that, he’s got a shot at his first state title this weekend.

“I think more than anything, it is just mental,” he said about preparing for state. “It’s just keeping their minds in the right place and continuing to work on condition. The best thing we can do is be in the best shape of our lives so when we get to the third period of those tough matches, we’re in better shape than our opponent.”

Hopkinsville will second four wrestlers to Lexington, including three seniors.

“I’m proud of the guys going but we had three lose in the blood round,” he said. “A couple of them by decision. I always feel like woulda, coulda, shoulda. I’m happy with the four that are going but wish we had more. I don’t think content is the right word but looking to improve every year.”

“This is it,” Seaman said of his seniors. “This is their last try, they both know it. They’ve been preparing all year for this and their careers.”

Skuljan was disqualified during last year’s Region One tournament and didn’t get to go to state.

“I didn’t want it to happen again,” he said. “I walked here this morning, all my coaches were telling me just like last year, don’t say nothing, don’t do nothing. I just told myself ‘no matter what happens, just keep on wrestling.’ ”

Skuljan said he needs to score more if he wants a chance at a title.

“I’m going to do whatever I have to do to prepare myself to win that state title next week,” he said.

Seaman said having a freshman go with three seniors will help Matt learn a lot during the trip to Lexington.

“Tru’s been a huge addition to our team,” he said. “He’s a real good kid, good in the classroom and he’s a good example as a first-year to a lot of these kids that have been in the room. He’s passed up a lot of guys that have been there 2-3 years. Everyone he’s going to state with has a lot more time on them. He’s really a leader even though he’s a freshman and a first-year.”

Seaman said he wants his guys to savor their final tournament of the year and for the majority of them, their career.

“Just be ready,” he said. “Wins are wins. Make sure your weights on and wrestle smart … Wrestle to the best of your abilities because this is it for the season and three of my four guys, this is it for their high school career.”

Stevens said he watches film Sunday and is already preparing for a possible rematch with Little in Lexington.

“All the work that I can put into it, I just got to put that forward and keep working,” he said. “To keep progressing and get higher on the podium, all it is is hard work and mentality. You just got to have that mindset to keep going, keep pushing through the pain and hopefully if that hard work will get your technique and it’ll put you through.”

For Stevens, wrestling his final regional tournament at Trigg County was special.

“It felt amazing,” he said. “Finally got some fans out there supporting me from my grade and the school. Just felt great to be able to come out here and wear this Trigg County singlet one more time in this gym and put on a show. I hope they enjoyed it.”