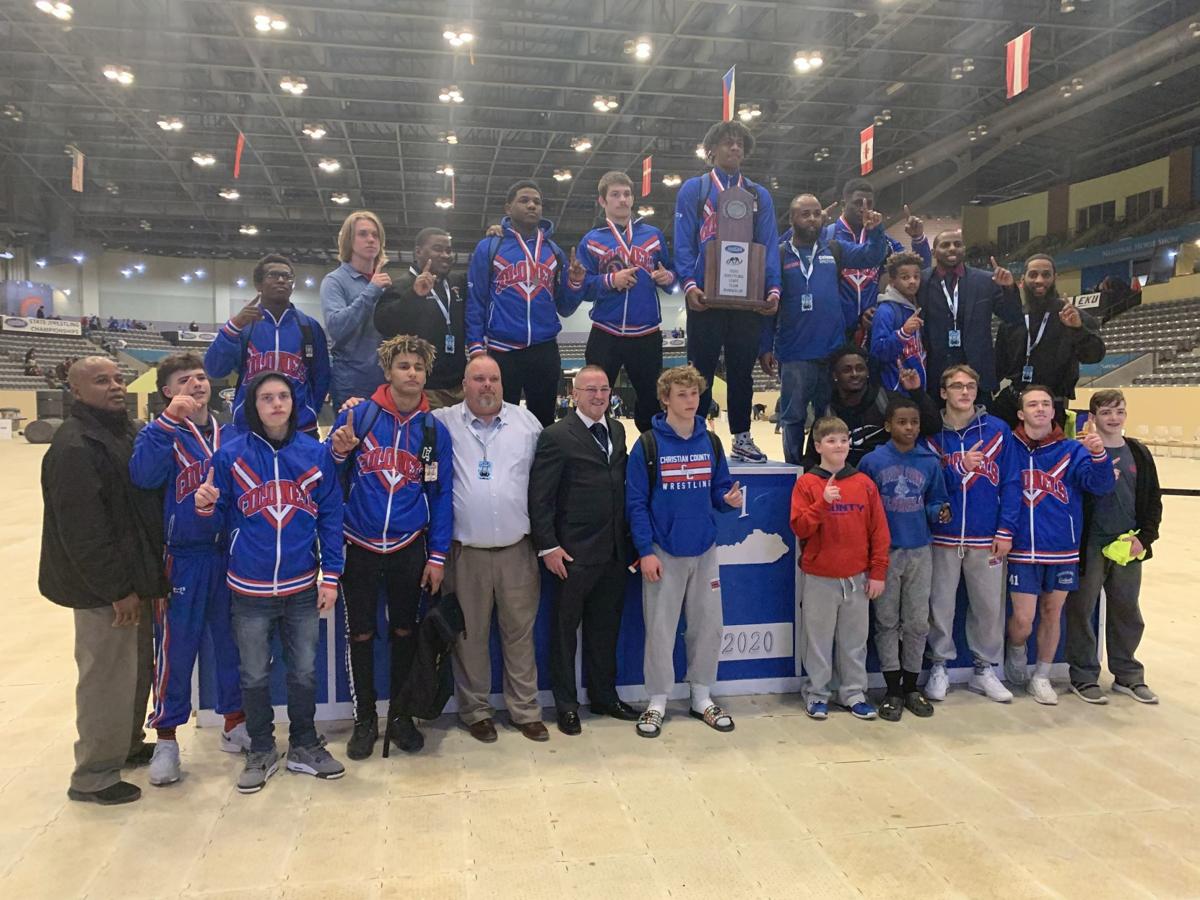 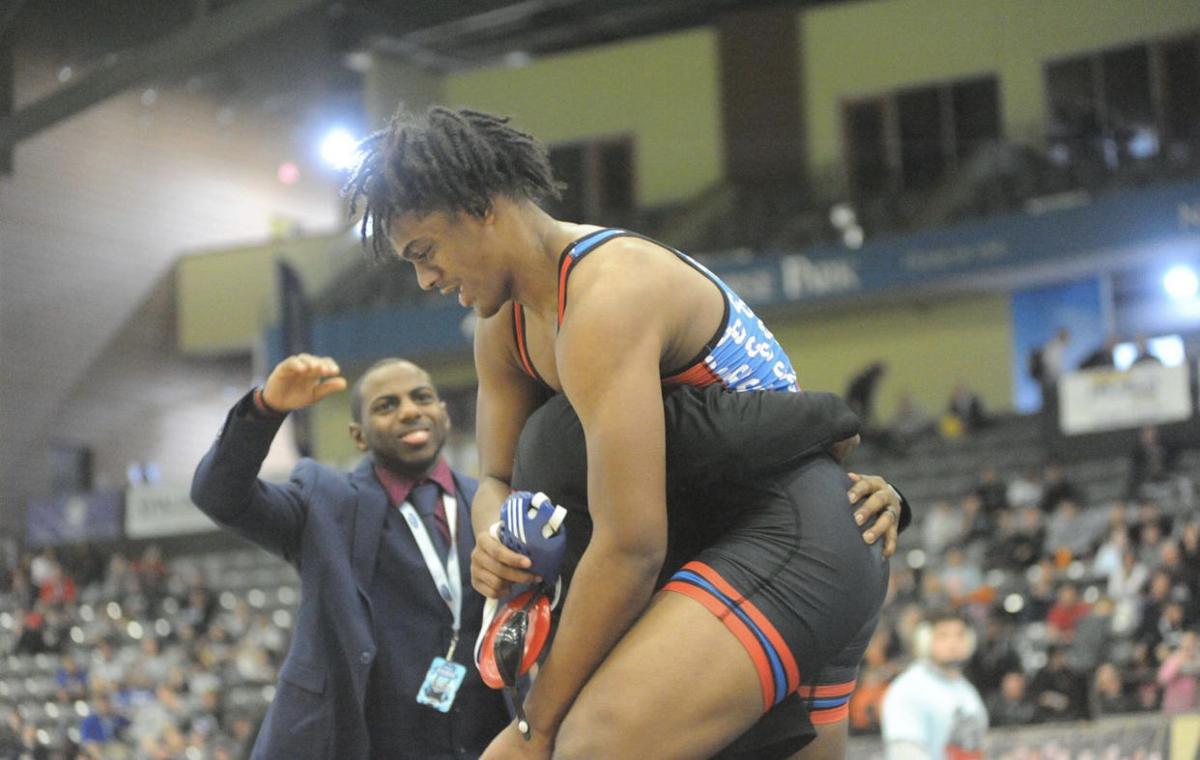 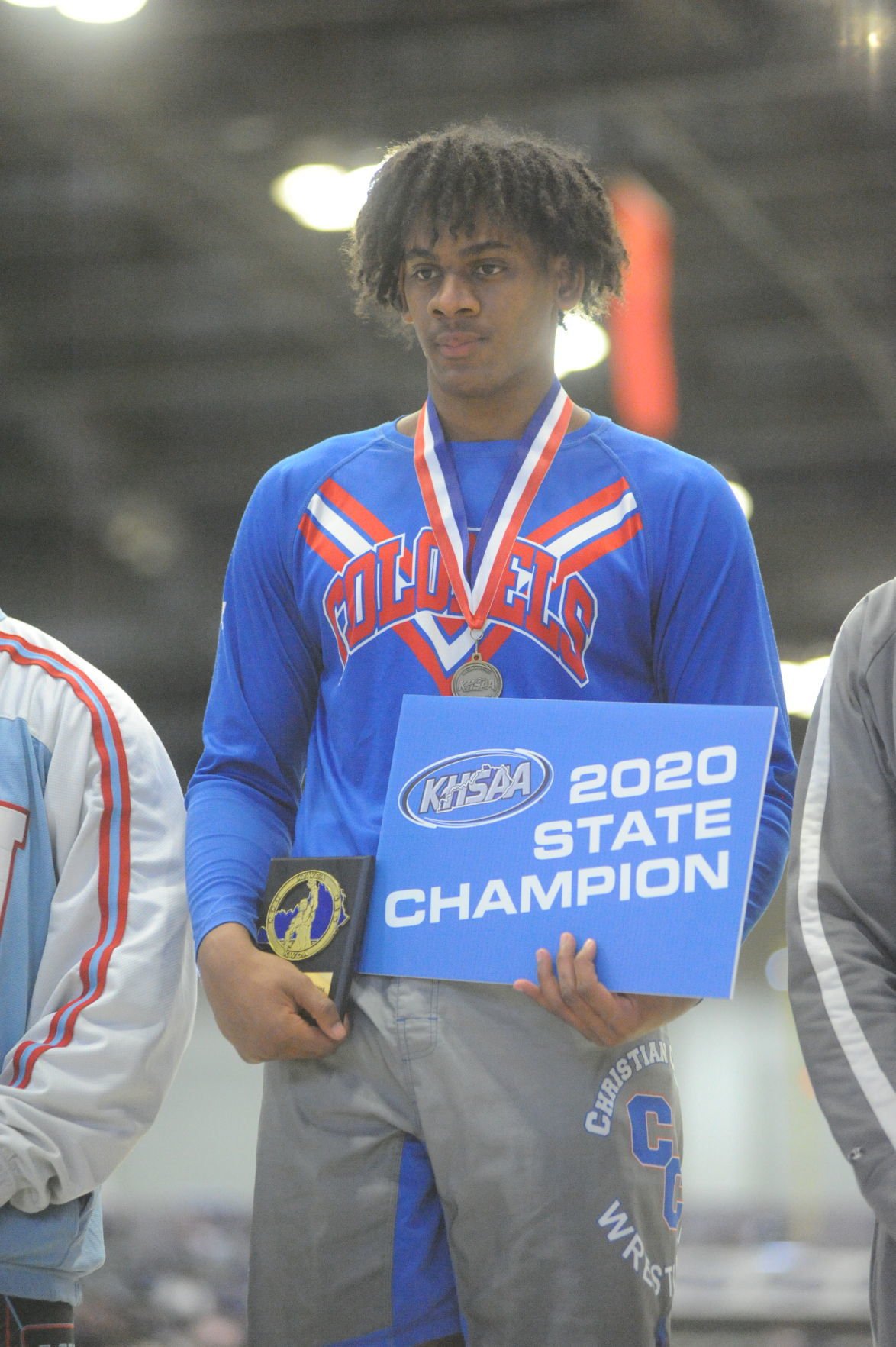 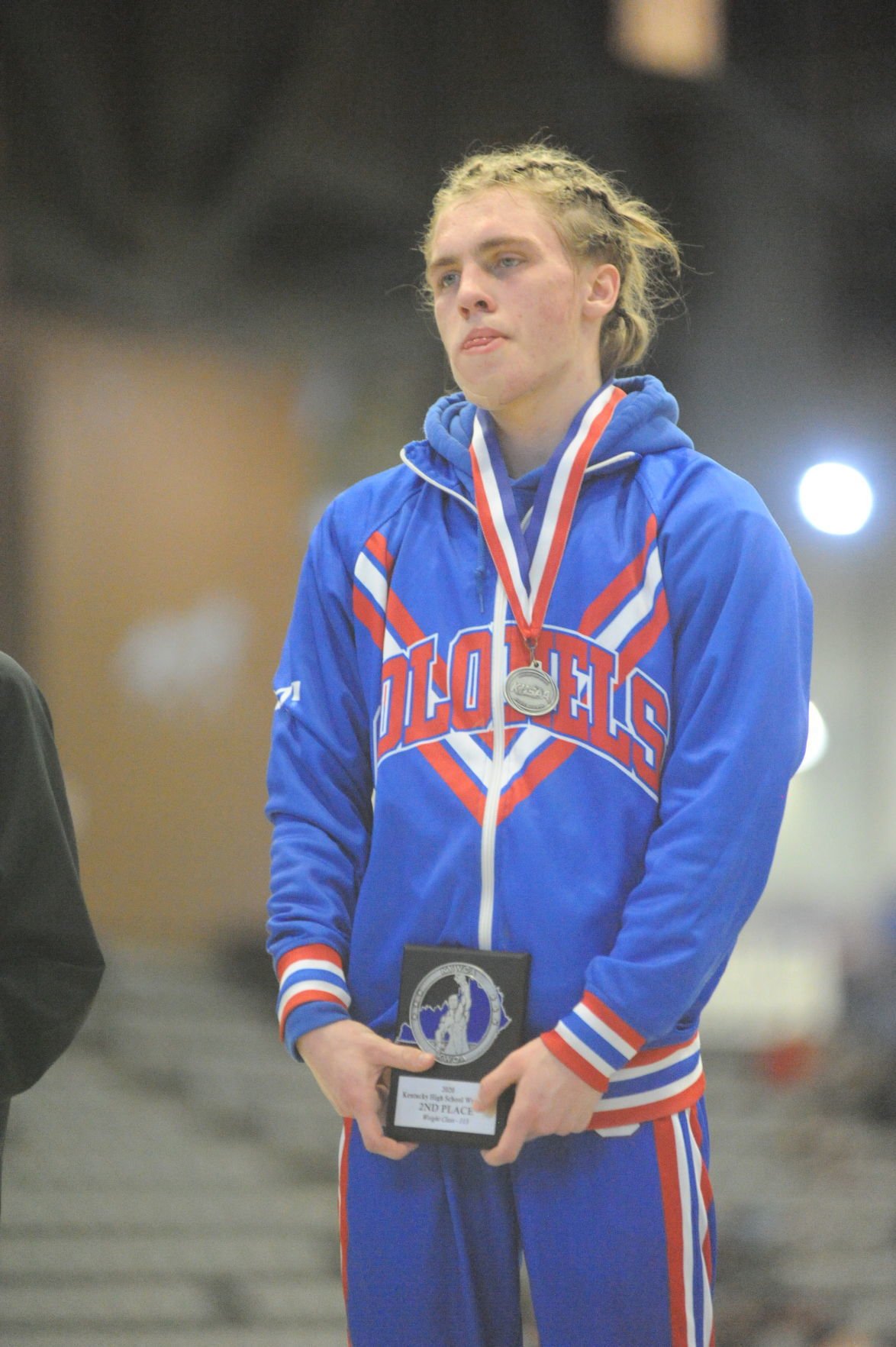 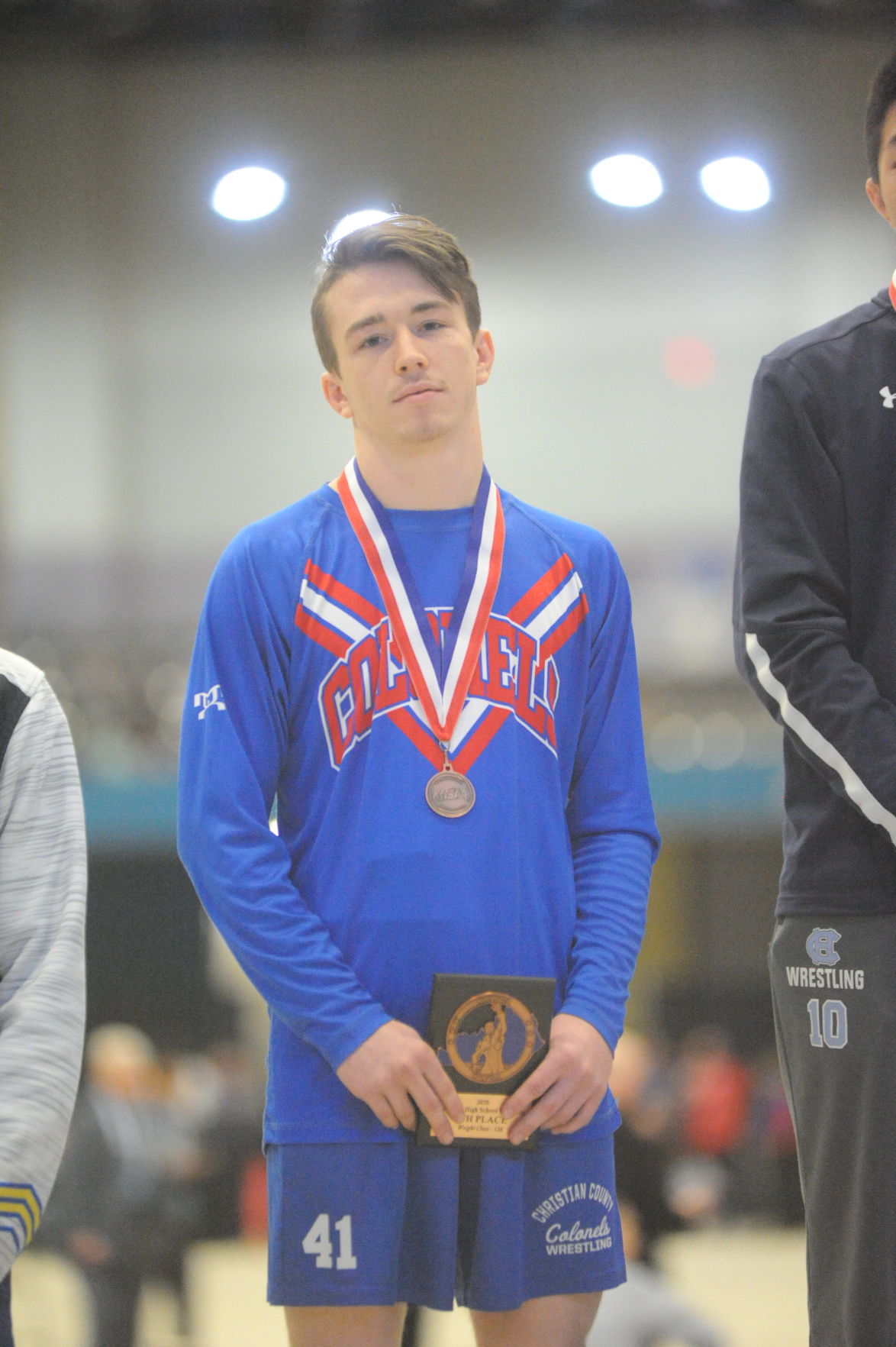 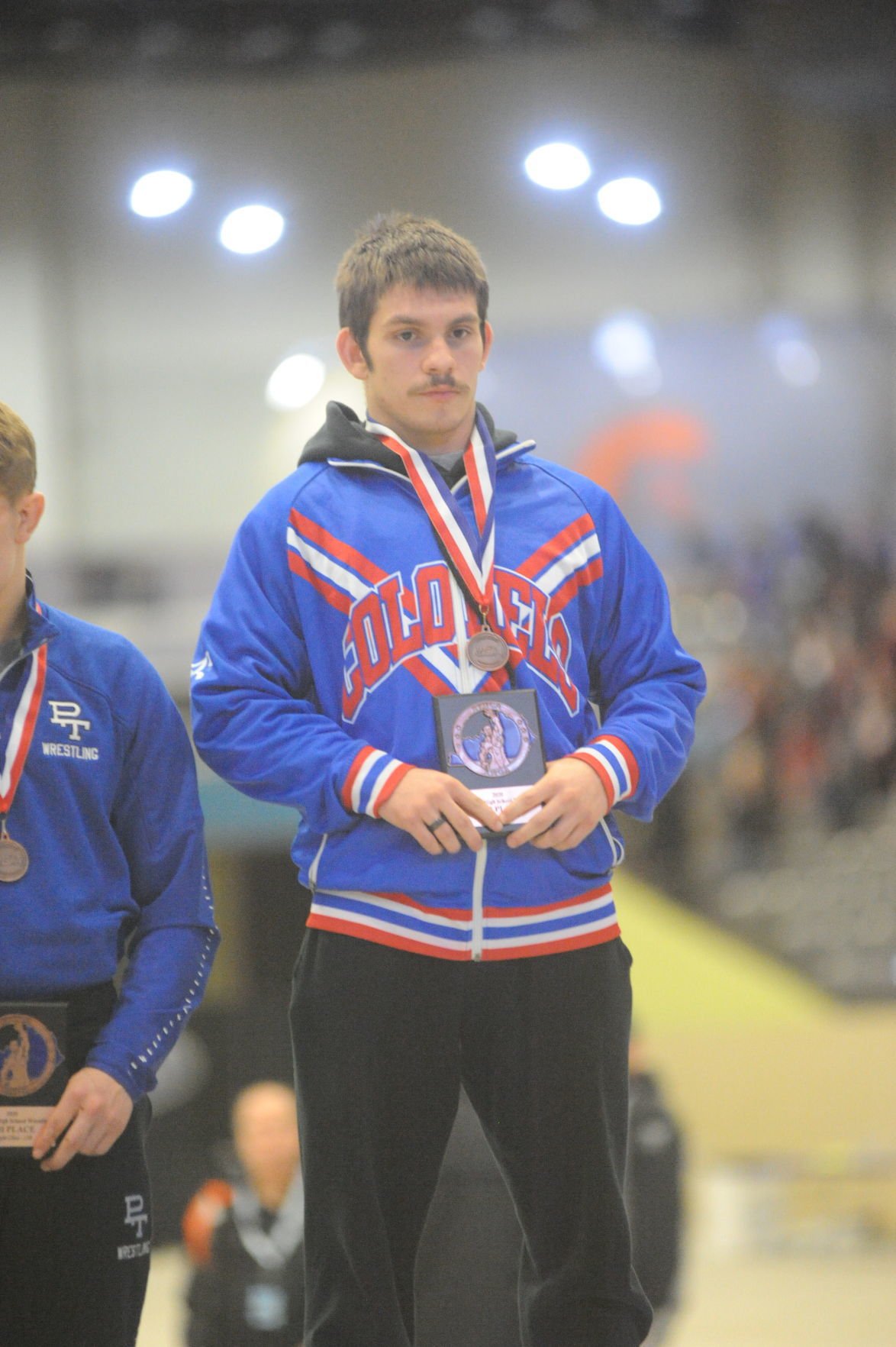 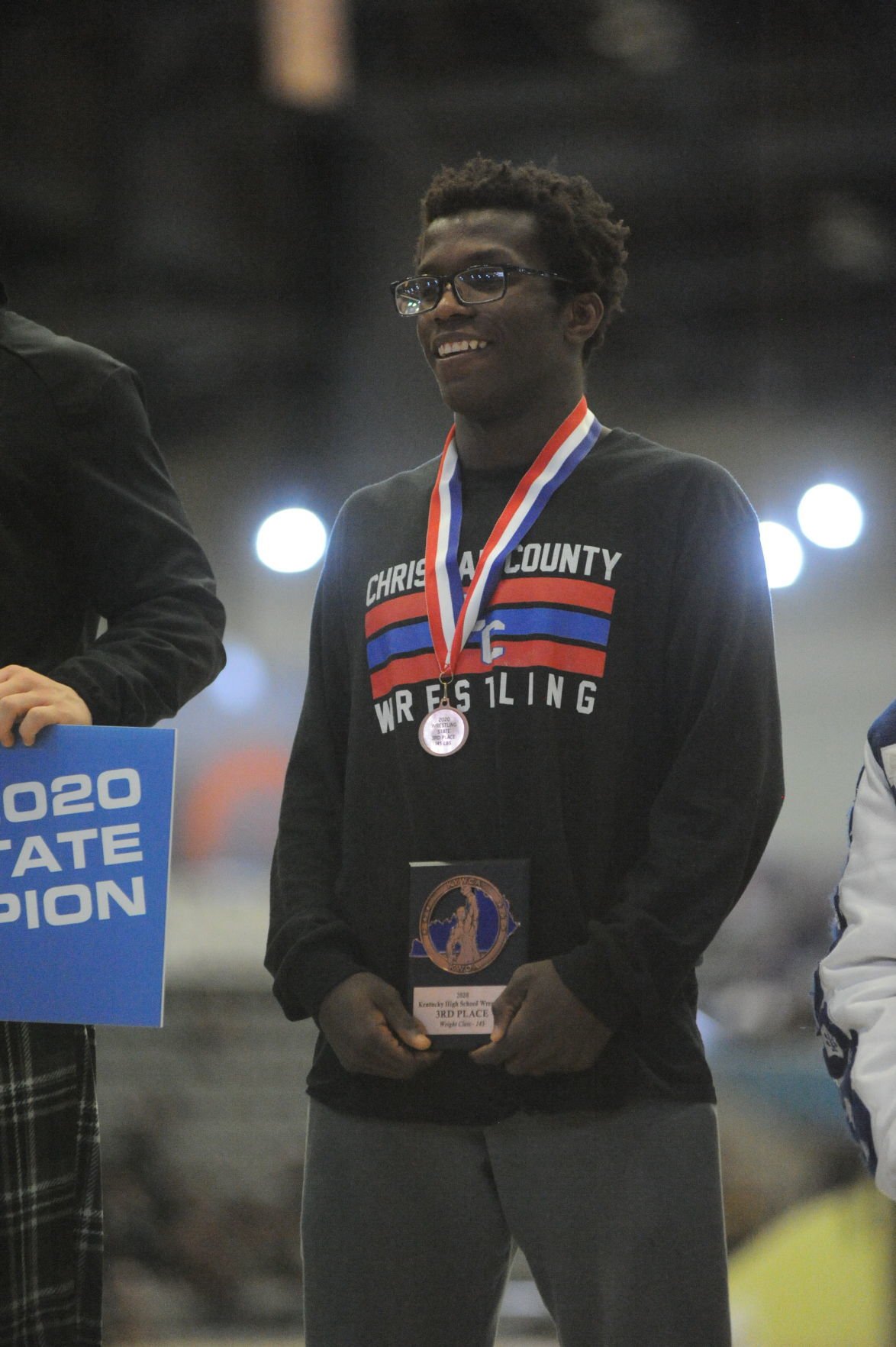 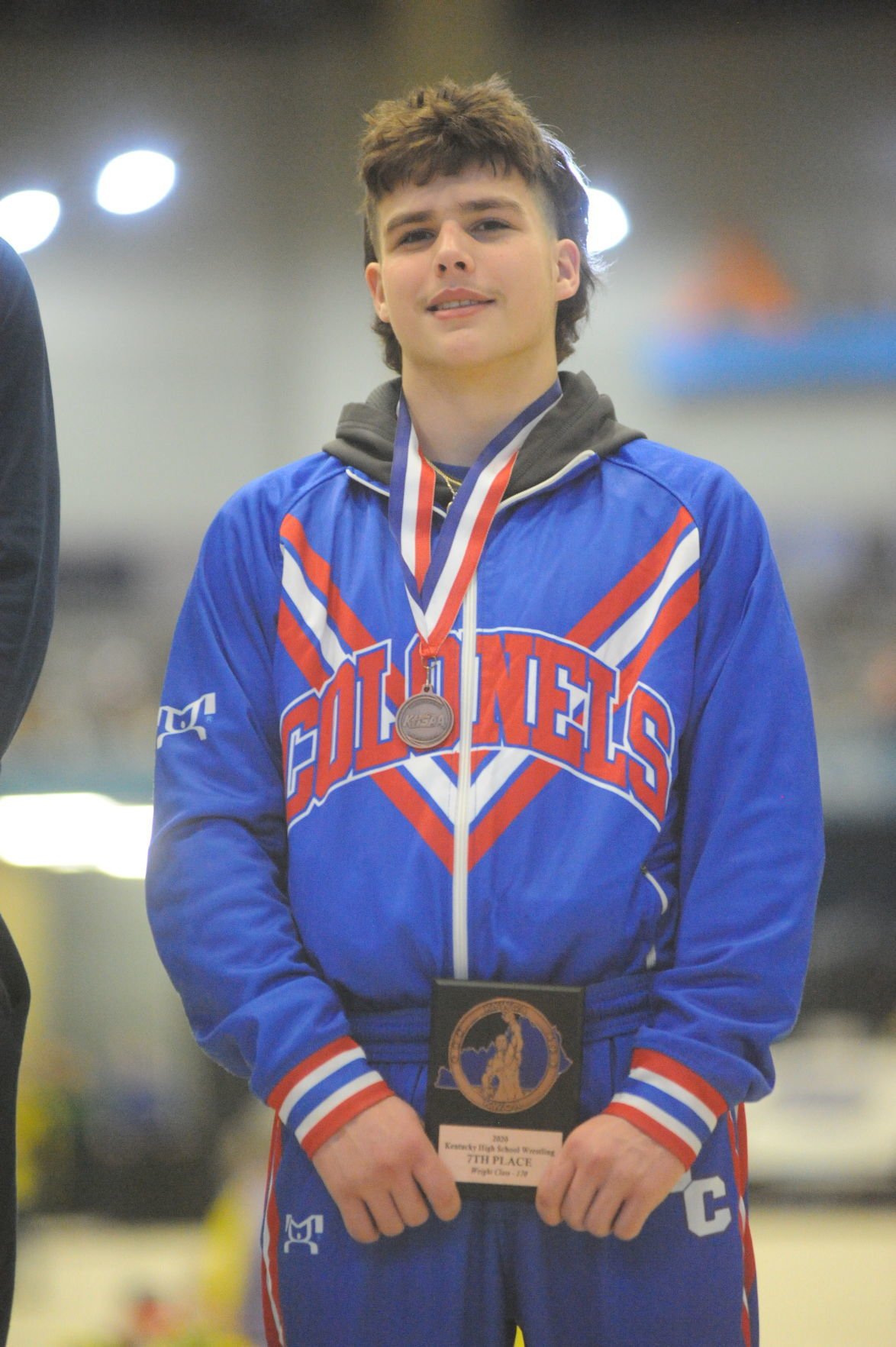 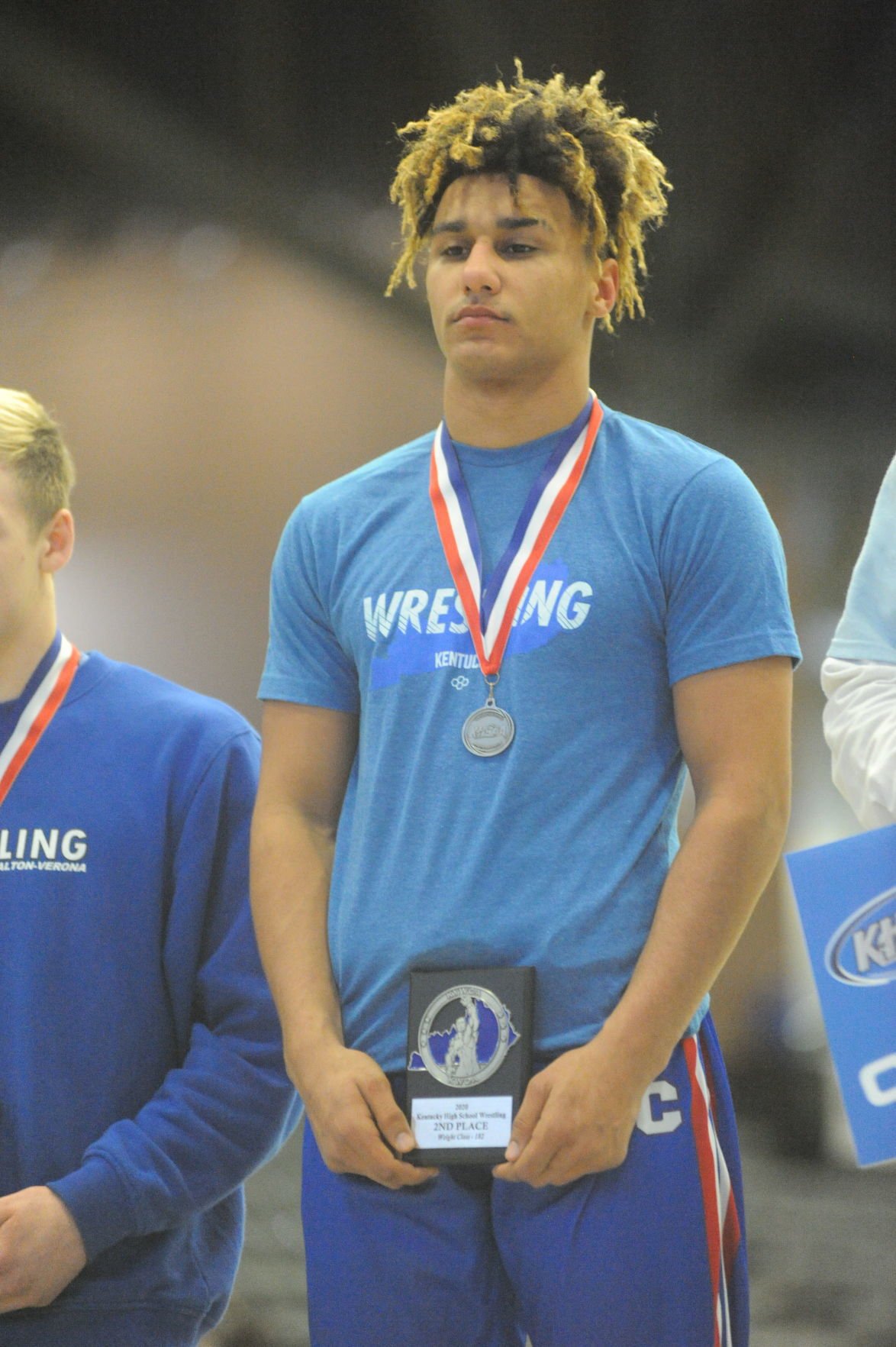 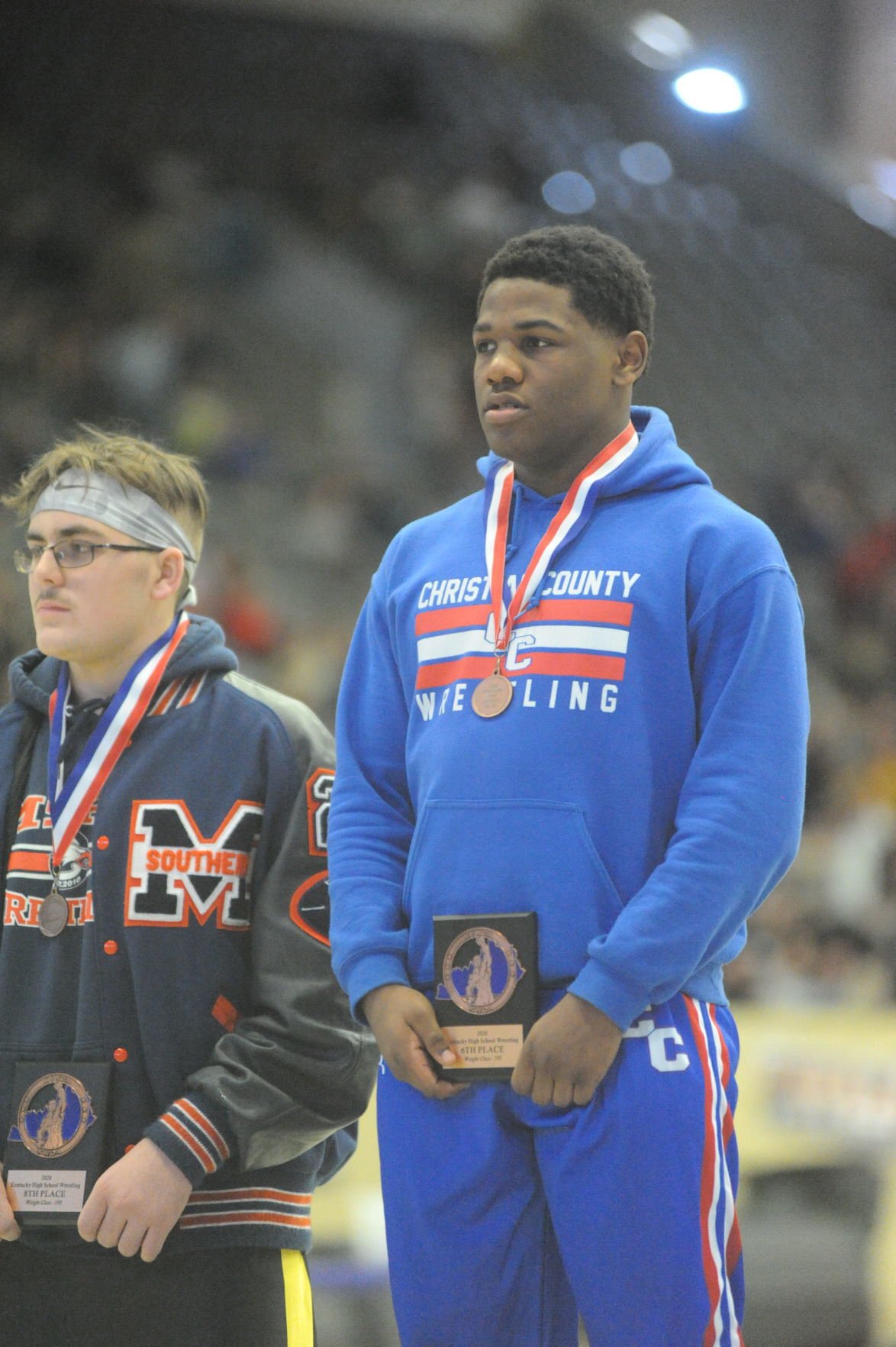 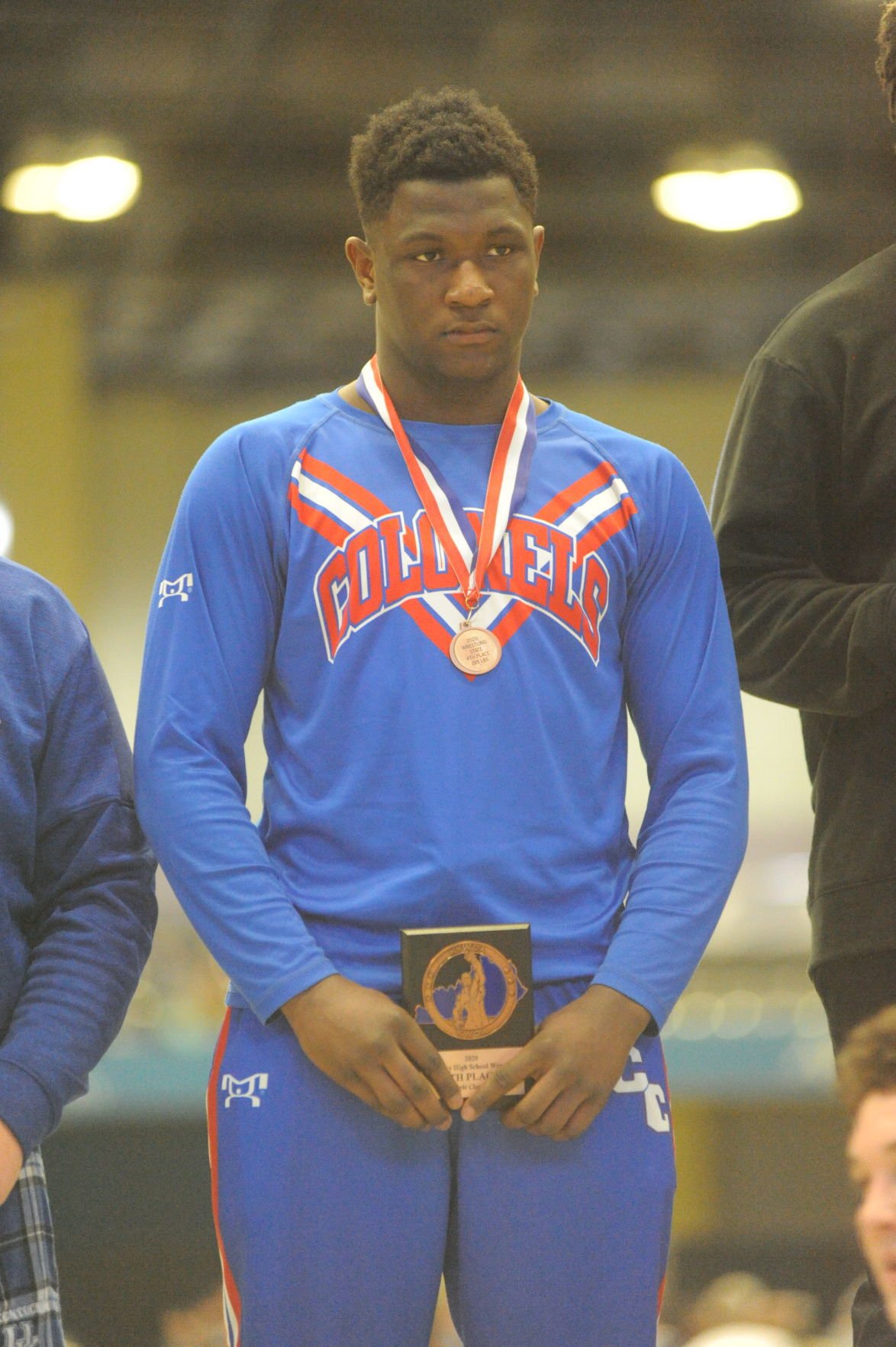 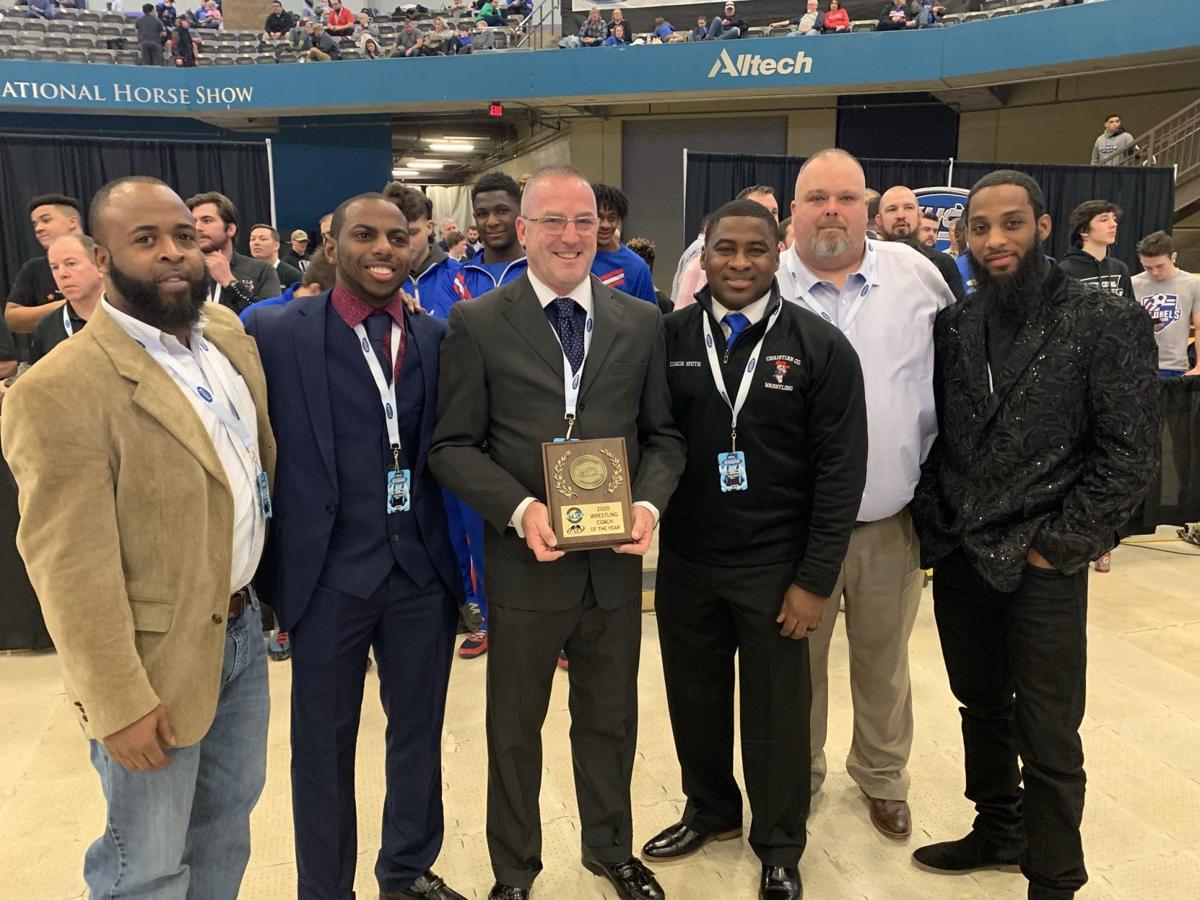 Christian County’s Robert Burnham (third from left) is the 2020 KYWCA Wrestling Coach of the Year. 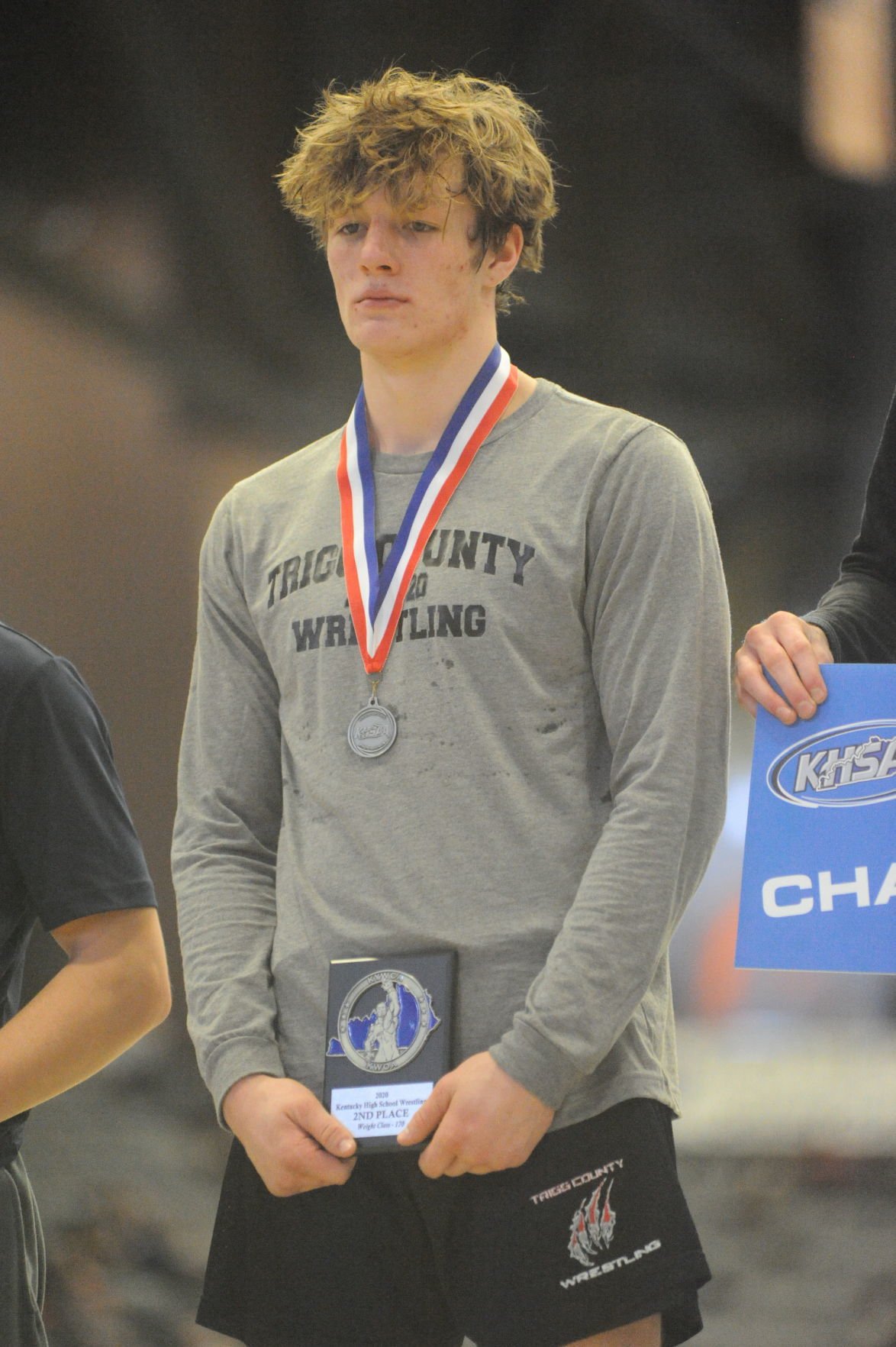 Christian County’s Robert Burnham (third from left) is the 2020 KYWCA Wrestling Coach of the Year.

LEXINGTON — When the dust settled Saturday at Alltech Arena in Lexington, the Christian County Colonels did something they haven’t done in a long time.

Along with Niko Bussell’s state championship, the Colonels placed nine wrestlers on the podium at the KHSAA State Wrestling Championship and finished runners-up to Union County for their best finish since 1988’s state championship as the Braves broke a state record with 299 points to claim their fifth-straight state title.

Christian County coach Robert Burnham was named the 2020 KYWCA Coach of the Year, but he said he’d give that up in a second.

“I’d give up everything to be first as a team,” he said. “I’m honored that the other coaches in the state thought I was the coach of the year, but I’ve already said, it’s not me as a coach, it’s a staff. As far as I’m concerned it’s a staff of the year because I couldn’t do this without my assistant coaches.”

The Colonels put three wrestlers in the finals and while they only grabbed one state title, Burnham said it’s a big step forward as it solidifies the foundation they’ve built.

“For me, for my time, this is the most we’ve had in the finals, it’s the most we’ve had on the podium,” he said. “We put nine on the podium, I’ve never had nine players … If this is any other year, 200 points wins … I’m not upset. I’m very happy. I would love to win one, I still want to win one. We’ve gone right back now and we’ve already started thinking about what we’re going to do for next year. We don’t want this to be a one-time-only thing.”

Union County cruised to their fifth-straight title as the Braves wrapped up the championship by mid-afternoon.

Burnham said he’s never seen a team like the Braves.

“Union’s team is a special team,” he said. “You score 299 points, my hats off to them. But they can’t keep it up forever or at least I hope not … That’s the best I’ve ever seen. I don’t ever remember people having nine people in the finals. I got nine on the podium, they’ve got nine in the finals.”

The Colonels went a long time without a state champion and now they have one in back-to-back seasons as Jakerion Merritt won the title a year ago.

Burnham said his wrestlers did everything they could do.

“I’m ecstatic,” he said. “I’m very happy with how the season went, how the season ended. I think our kids did everything they could possibly do to be successful and the best part about it is Niko got him one.”

Christian County went into the weekend with five seniors. Four of them finished their careers with medals.

“All my seniors got on the podium except for one and we’re crushed for Neil (Aldridge),” he said. “If there’s a harder worker in the state, I want to meet him.”

But Burnham said that wasn’t the most important thing.

“Every one of my seniors is going to move on to something else,” he said. “That’s all you can ask as a coach that they move forward or have an opportunity to move forward.”

Stevens said he doesn’t know how to define his legacy right now.

“My minds kind of blank right now,” he said. “It really hasn’t kicked in that I’m done but it probably will later tonight. Going down as one of the greats from Trigg County so far is great but I hope my journey doesn’t end here. I hope I can go back and help coach and help form some of those wrestlers that are in the stands right now.”

Much like his brother, Stevens has formed a bond with the other wrestlers on the Wildcat roster.

“Those kids mean the world to me,” he said. “That’s family to me. Every single one of them is my brother. I just want to see them succeed more than me. Not make the same mistakes and go out there and wrestler and have fun and turn into a better man throughout this.”

Throughout his career, Stevens’ family was right beside him every step of the way.

He said he wouldn’t be where he is without them.

“It’s a great feeling to have family,” he said. “Not only up in the stands but on the mat with you. After a win, they’re there to help you grow, get better and tell you where you messed up. After a loss, they’re there to keep your head up.”

Fowler fell to Union County’s Trayce Eckman by pin-fall in the third period Saturday and Fowler said he could have done a few things differently.

The junior was banged up for the better part of the season and said that’s going to be the thing he worries about the most as the season ends.

“This offseason I’m just going to focus on getting healthy,” he said. “I’ve had shoulder problems in both shoulders so my biggest goal is to come back from that and be stronger next season.”

Fowler said they had a lot of expectations this season and it all started with the senior class.

“We have a big group of guys that are leaving us this year that basically I grew up with on this team,” he said. “We won middle school state with these same people. It just meant a lot for all of us to be here.”

Coleman was pinned early in the first period against Union County’s Micah Ervin in the 182-pound title and like Fowler, he would have approached the match differently if he could do it again.

Coleman still finished with 30 wins during his senior season, which is something to hang his hat off after a solid Colonel career in football as well.

Coming into the season, Merritt had high hopes of repeating as a state champion while coaches and teammates felt that sentiment as well. Merritt didn’t reach his ultimate goal but when he fell Friday in the quarterfinals, he knew what he had to do.

“I was a little upset,” he said. “I wasn’t upset that I lost, I was more upset that I gave everything and still ending up losing. I was upset but at the same time, I couldn’t be down on myself. I got teammates that look up to me so if I’m down, they’re going to be down. That doesn’t work when you’re a working machine.”

After he lost, Merritt said he had to get third because that’s what the team deserved.

Merritt said his state championship last season started something special that he knows will continue after he graduates.

Grant-Hall wrestled in seventh-grade but then stepped away from the sport.

He said he had coaches and Merritt start asking him if he was going to come back.

After some coaxing, he was back for his junior season.

“Then the stars just starting aligning,” he said. “Let’s give it a shot. Let’s see what we can do this year.”

Grant-Hall said coming back was the right decision.

“It is absolutely amazing,” he said. “Not only myself, but the people I call my brothers around me help commit to that. We worked our butts off in the room and we finally got it to pay off.”

Now with his senior season in his sights, Grant-Hall said he toyed around with the idea of not wrestling again, but Saturday proved to be too much fun.

Heading into Friday, Kelly was the 24th ranked 285-pound wrestler in the state. He said he wasn’t happy about that and after a fourth-place finish Saturday, he’ll surely be ranked higher when next season starts.

He said it was a tough season for him but his trust in his coaches helped him prevail.

“It was kind of hard because I didn’t think I would make it this far myself,” he said. “Coaches, they would tell me ‘you’re stronger than this kid. You’re faster than him. We conditioned you for this. You’re going to go out there and give it your all and beat them.’ The more they tell me that, the more I believe so I go out and give it my all.”

Kelly fell to Matthias Ervin by a single point in the Region One final but he said he didn’t get want he needed.

“It gave me a lot of confidence but I feel like I didn’t get the satisfaction that I wanted,” he said.

The junior is already looking forward to his senior season.

“I need to work my butt at practice,” he said. “I need to keep doing what I’m doing. Listening to the coaches because they’re going to guide me the right way. I lift more weights, I’m there.”

An injury ended Wells’ final match Saturday but he still walked out of Alltech Arena with a sixth-place finish.

Wells, a senior, said he had to fight through the pain on the final day of action because he wanted to leave it all out on the mat.

“It was my last year, my last time so I was just pushing through it,” he said.

Wells said seeing Burnham recognized as coach of the year meant a lot to the team and said he thinks the rest of the state knows what they’re capable of now.

“I think they realized we really stepped up from last year and made a big change,” he said.

When Harvey started his season, he wasn’t sure what he was capable of. But a sixth-place finish will definitely help how he goes into next season.

“It feels good,” he said. “At the start of the season, I really didn’t think I was going to make it this far but I made it.”

Harvey said it’s been a difficult year for him.

“It’s been rough,” he said. “Lots of ups and downs. I wrestled down and now I’m back up just wrestling my matches.”

Despite the setbacks, Harvey said it’s a good feeling to be a part of something that hasn’t happened in a long time.

Adams lost his first match on Friday but went on a tear.

Adams won his next four matches (3 by pin, 1 by major decision) before losing to the same wrestler he lost on Friday to in St. Xavier’s Everett Marret.

Adams said he only had one goal after losing his opener match to Marret.

“I just had to get back and I didn’t want a repeat of last year,” he said.

The freshman said he got a lot of fuel from his finish a year ago.

Adams also plays football for the Colonels and he said he’s ready to get back in the wrestling room next season.

“Staying in shape and staying down in the room to get some more work,” he said was his mindset after the season.