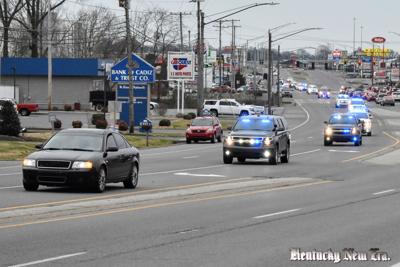 In honor of Hopkinsville’s finest, our community showed strong support for a hometown hero this week. The event served a reminder that those who put their lives on the line for the well-being of others deserve our appreciation each and every day.

Officer Jeremy Davidson of Hopkinsville Police Department received a hero’s welcome home on Tuesday afternoon. Davidson was injured early Monday morning in pursuit of a robbery suspect. He was taken to Skyline Medical Center in Nashville after being shot in the arm and head. Thankfully his injuries weren’t life-threatening, and his stable condition allowed him to return home to Hopkinsville the next day to recover.

With the help of other agencies, the suspect and three other accomplices were later apprehended and now face multiple charges, including two counts of attempted murder of a police officer.

Having never been on the receiving end of a firearm’s discharge, I cannot begin to fathom the emotions and thoughts that must have come over Davidson or his fellow officers as the events of Monday morning unfolded. What I do know, however, is that I am indebted to the men and women that risk their own safety and security to serve and protect our community.

On my drive home Thursday afternoon, I merged onto an exit ramp too quickly, crossing the rumble strips as I left the parkway. I thought nothing of it, but it caught the attention of a Kentucky State Police officer driving a few car lengths ahead of me.

He slowed down and merged in behind me, promptly illuminating the blue lights atop his cruiser.

“Honestly, officer, I’m not sure,” I replied.

“I heard you cross the rumble strips back there, and I wanted to be sure you’re not impaired,” he said. “I lost a buddy recently to an impaired driver, and I take it seriously.”

I had just left the office, and of course was not under the influence, but I understood.

“I don’t see anything, and I don’t smell anything,” he said. “But for my own peace of mind, would you take a breathalyzer test? I just really, really take this stuff seriously.”

I had never taken a breathalyzer before Thursday, so the officer had to give me instructions. We both smiled when it came up 0.00 on the digital screen.

“Thanks, buddy,” he said. “I’m just trying to get home to my family like you are. It makes me feel good to know for sure, ya know? Try not to take those exit ramps so quickly and have a great evening.”

First responders across all disciplines are everyday heroes. They arrive in our time of greatest need, and more often than not they go above and beyond the call of duty to ensure the community they call home protects its own.

Their selfless service as well as the sacrifice they and their loved ones make does not go unnoticed. I feel better knowing that people like the officer who stopped me take the extra precaution, and I am overjoyed that Officer Davidson is at home resting with his loved ones after a difficult experience earlier in the week.

You are all truly heroes, and though we don’t tell you enough we appreciate you.

OPINION: In support of the nickel tax

Christian County's two high school facilities are aging and dilapidated. Regardless of how the buildings came to be in the condition they are in, and whether the photos circulating on social media over the last few days were legitimate or not, there is no doubt that the fifty-plus year-old school buildings need to be rehabilitated or replaced. The only short-term solution to the issue is enacting a nickel tax to increase the system's bonding capacity.