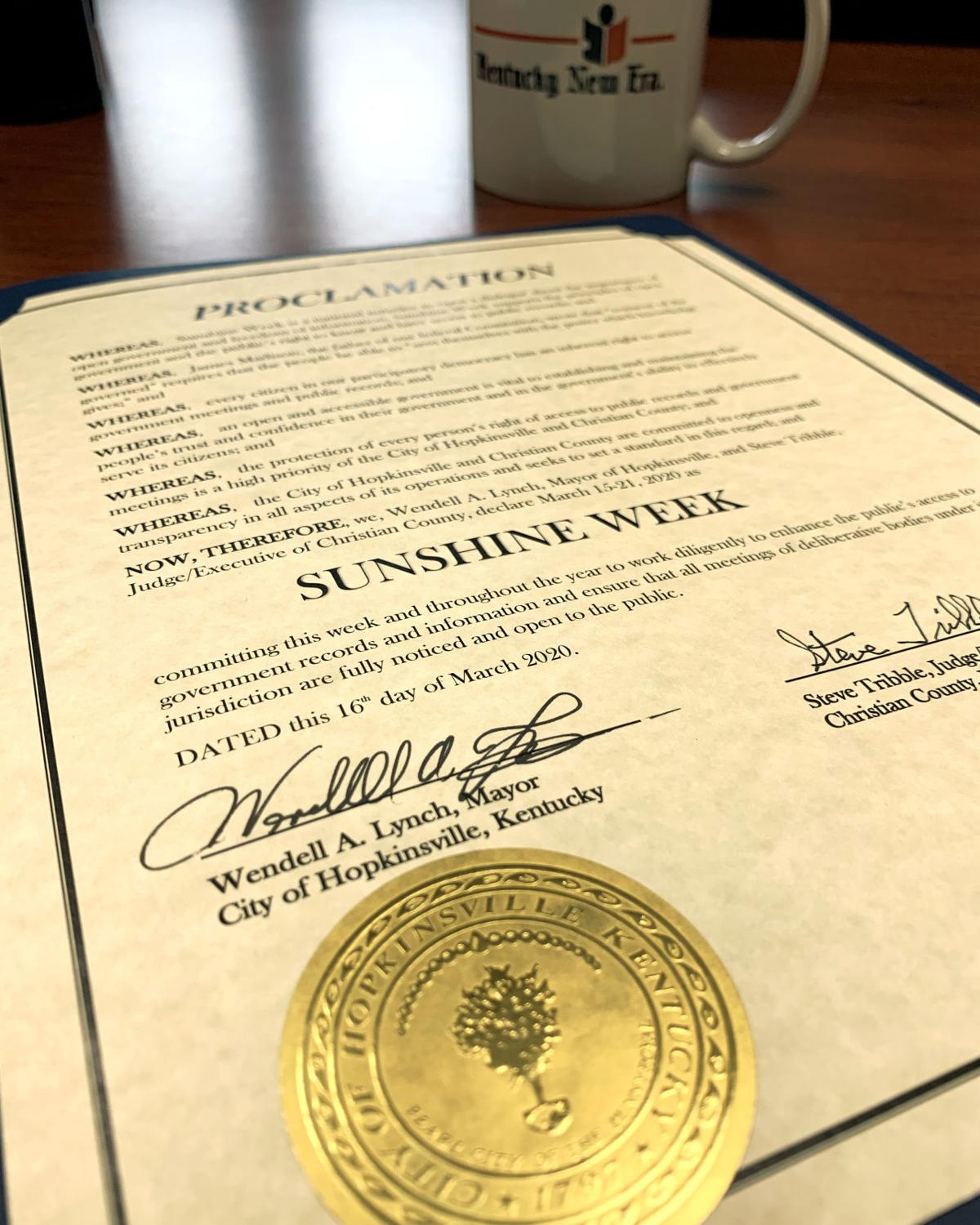 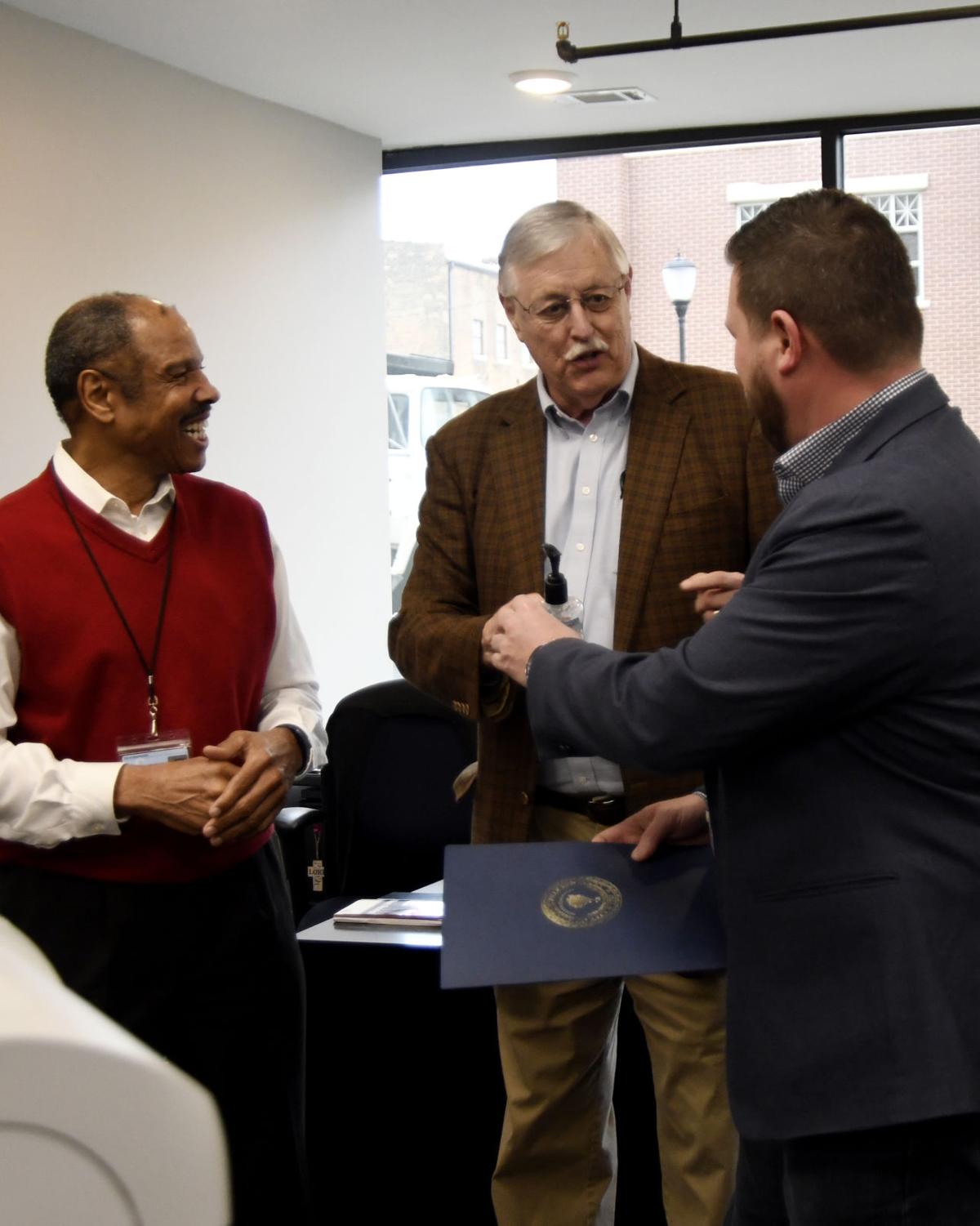 Sunshine Week is March 15 through 21, 2020. The initiative promotes the importance of open government and freedom of information. Several outlets including the Kentucky New Era will place emphasis on the public’s right to know what its government is doing, and why.

This week is Sunshine Week, an initiative to promote the importance of open government and freedom of information. The annual week of awareness has been coordinated by the American Society of News Editors since 2005.

This non-partisan, non-profit initiative is celebrated in mid-March each year to coincide with James Madison’s birthday on March 16.

Madison, this nation’s fourth president, was instrumental in informing the public about the U.S. Constitution, its ratification and the Bill of Rights. He, alongside Alexander Hamilton and John Jay, published The Federalist Papers, a collection of articles and essays promoting the ratification of the document in America’s earliest days.

From March 15 through 21, several outlets including this newspaper will place emphasis on the public’s right to know what its government is doing, and why.

Participants include news media, government officials at all levels, schools and universities, libraries and archives, individuals, non-profit and civic organizations, historians and anyone with an interest in open government.

We appreciate our local officials and their efforts toward transparency. I only wish we could say the same for the General Assembly in Frankfort. Government officials nowadays often try to pass off ambiguous legislation so that impeding the press can be made even easier.

In recent weeks this newspaper has reported on multiple attempts by the Kentucky House of Representatives to curb open government and thwart transparency by removing the requirement for publications of public notices in one well-publicized location – your community newspaper.

House Bill 195 and the committee substitute for House Bill 351 both seek to bury important public notices on hundreds, maybe thousands, of websites run by the government itself to weaken transparency and abandon accountability.

While HB195 was never ambiguous about what it was, HB351 began as a 24-page bill to define terms for taxes on tobacco products and to impose an excise tax on vapor products. House Leadership substituted the bill in committee with a 201-page effort to ram through a myriad of bad policy, including the elimination of public notice publication in local newspapers.

At the federal level, the amount of time public officials take to return a records request is sometimes measured in years as opposed to days.

Many smaller communities continue to fall victim to government corruption and bait-and-switch tactics in this day and age, either from state and federal agencies or their own friends and neighbors. The public has a right to know where its tax dollars are going.

In today’s special circumstances of “social distancing” and a public health emergency related to the COVID-19 coronavirus pandemic, many governmental bodies are deliberating more frequently and without audience. I for one support their efforts and am pleased that many have chosen to stream their meetings online – but open meetings and open records laws still apply, and it is all of our job to make sure we keep decision-making in the open.

Government transparency is as important today as it has ever been. Just as modern technology has made it easier for governments to act, it has also provided new avenues for those who wish to deceive to conceal their actions and intentions. Journalists in your community continue to fill an important need in order to sustain our republic and its democratic ideals.

That said, Open Records laws aren’t just for the free press. They are for every citizen to take full advantage of. Pick up your local newspaper, read it and engage with those who make it a priority to share information with you.

Do your part to ensure that the sun continues to shine a light on open government and transparency at all levels.

The City of Hopkinsville and Christian County are committed to openness and transparency in all aspects of their operations and seek to set the standard in this regard.

It’s my mission to connect people with ideas, information and each other so that they can make a difference in their communities. I’m a father, husband (to-be), brother and a son. I make my living managing newspapers and magazines across western Kentucky.