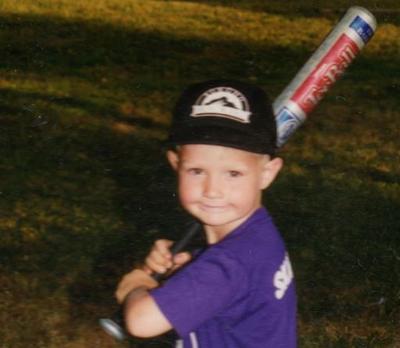 I’m sitting at my desk squeezing a stress ball that looks like a baseball. It’s early and no one has made it into the office yet.

This is my time. I can work on the small details that my job entails without any interruptions. But today, as I squeeze this baseball, I am thinking about how the sport has been a common thread throughout my life.

When I was a kid, I was short and stocky. I was fast and had good hand-eye coordination. So my dad, who was my baseball coach the entire time I played, made me the catcher.

I didn’t want to be the catcher. I wanted to be a pitcher. Really, I wanted to play third base because I wanted to grow up to be Chipper Jones.

My dad explained to me that the catcher was the most important player on the diamond. The catcher was in charge of the game. He scouted every batter. He knew their tendencies.

If the batter was prone to swinging at a slider in the dirt, it was the catcher’s job to steer the pitcher to throw that pitch. From that moment, I loved being a catcher.

Baseball was there when my relationship with my father broke down. We have the same personality. When I was a hormonal teen, we locked horns during an argument, and I quit the team he coached.

I disagreed with his guidance and never played the game again. I stopped watching the game.

Almost 15 years later, I moved to Cincinnati. There, I fell back in love with baseball.

My better half was studying for a big test. One of those tests that take half a year to study for. So my nights were lonely and boring.

The Reds were terrible and tickets were cheap. So for an entire summer, I would spend $4 for a ticket and walk the 15 minutes to Great American Ballpark to watch a team I didn’t actually root for.

I know it’s strange, a grown man going to baseball games alone. But those games gave me time to reflect on my past, on the choices I had made.

I realized that I wasn’t actually mad at my dad back when I quit his team. I was afraid. I was growing slower than my teammates, and no amount of work would make me 6 feet tall.

I was scared of not being good anymore, and my dad was there to take the brunt of my fears. I called him on the way back from a game to apologize.

Then I called him on the way to every game I went to that summer. As he drove home from work, and I walked alone to a baseball game, we would chat.

We had been through a lot together over the years leading up to those chats. We were close, but never as close as when we shared that game. Our talks meandered, there was no real thread. But we really started talking again.

Baseball was there when my relationship with my father was made new. As spring training begins, I look forward to sitting down at his place on Lake Barkley and watching baseball games when the weather is too nasty to go fishing.

I look forward to those meandering chats.

Jon Russelburg is the digital editor of The Kentucky New Era. Reach him at 270-887-3241 or jrusselburg@kentuckynewera.com. Follow him on Twitter @newerajon.

We are who we've always been

Through our lives, we make our own choices, but our experiences shape how we react to the world. They shape us into who we will eventually become.