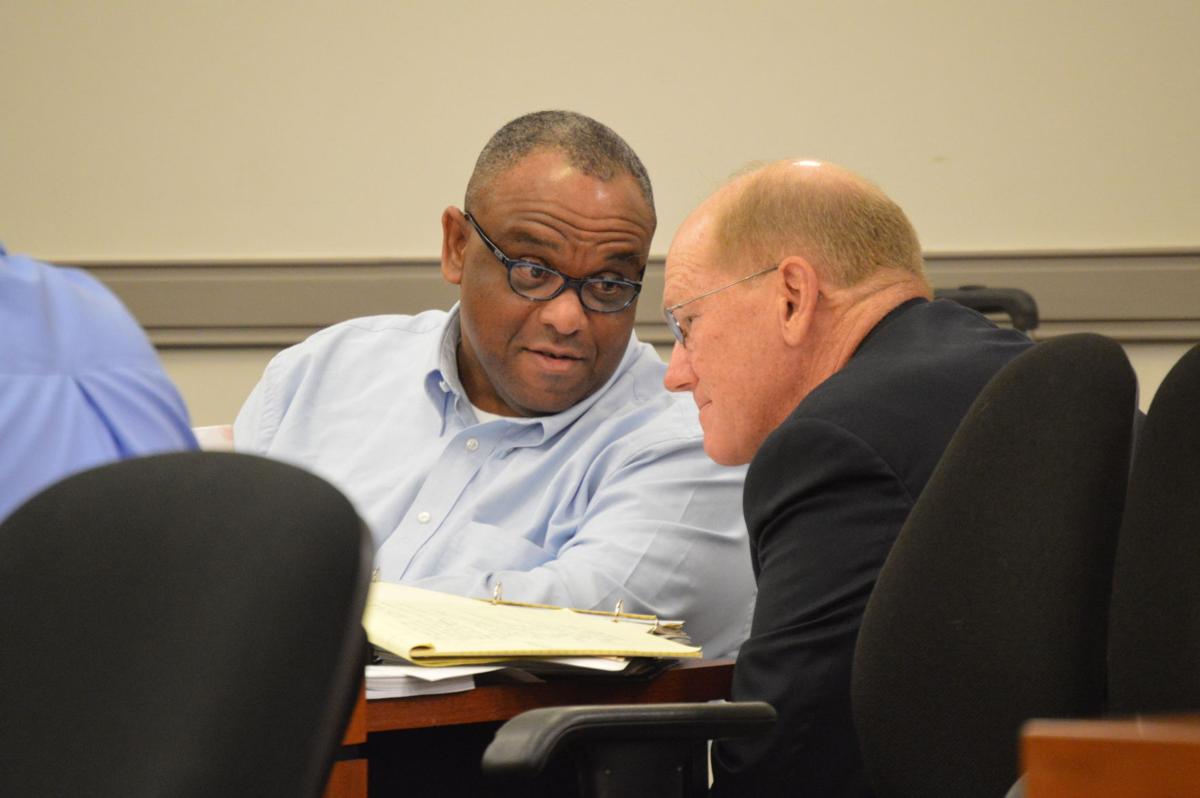 Ed Carter (left) talks with an attorney Wednesday in Christian Circuit Court, where he and two other men on on trial for the execution-style murders in 1994 of two young women who worked worked in New Life Massage Parlor, a front for a brothel. Carter was an Oak Grove police officer at the time of the murders. 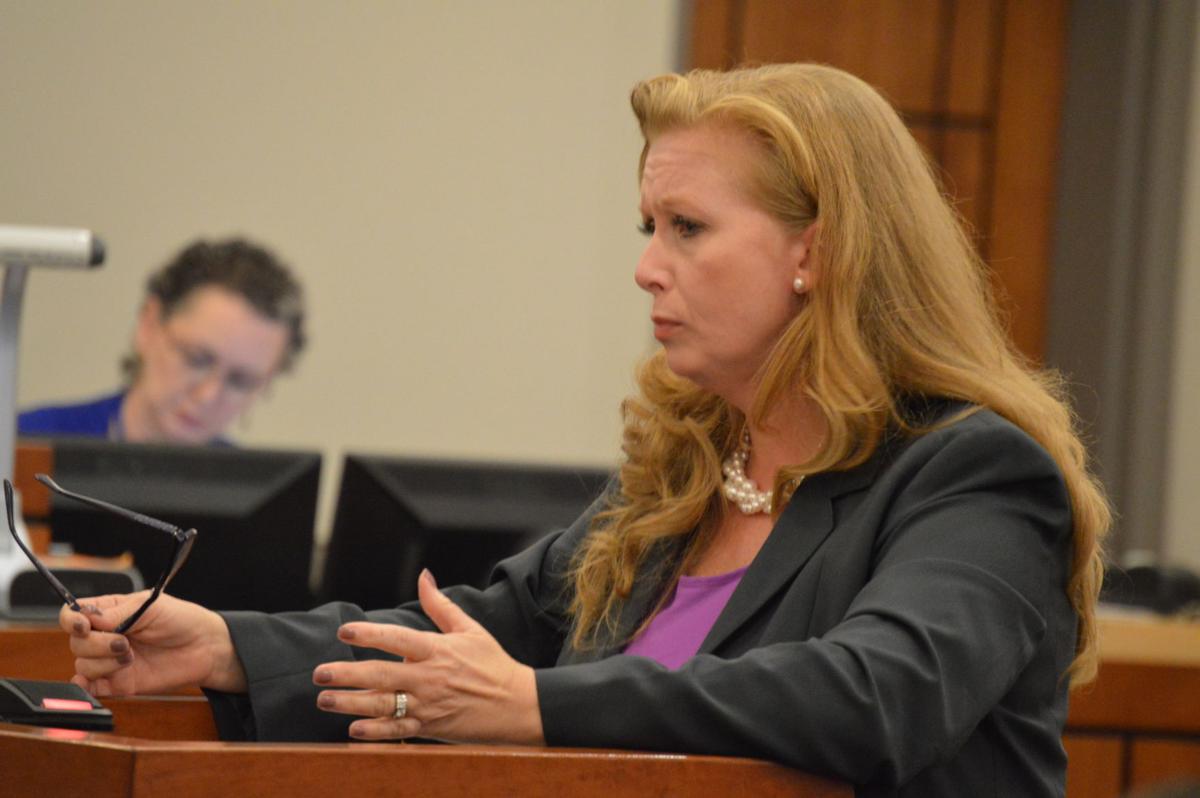 Ed Carter (left) talks with an attorney Wednesday in Christian Circuit Court, where he and two other men on on trial for the execution-style murders in 1994 of two young women who worked worked in New Life Massage Parlor, a front for a brothel. Carter was an Oak Grove police officer at the time of the murders.

A former Oak Grove madam, testifying Wednesday in Christian Circuit Court, said she paid police “hush money” to keep her business open in the months before two young women were killed in her brothel.

Tammy Papler Lamb told jurors that Ed Carter, who was an Oak Grove police officer, and others with the department received money and police equipment.

Reviewing evidence such as old cashier’s checks and receipts, Lamb detailed some of the payments. She said she paid then-Police Chief Buddy Elliott $600 to stop police from investigating the brothel and then $1,800 to his successor, Milton Perry, to be used for Christmas bonuses to the officers. There were more payments to individual officers and for police equipment, she said.

“He was very needy,” Lamb said, describing Carter. “We would buy him equipment. He would come to our house.”

She said Duncan and Carter were frequently at the business, which had a room in the front with a Jacuzzi and a few other rooms where the prostitutes performed sex with men who paid them depending on the amount of time given and the extent of the services. The room where Belt and Ross were found was called the Jungle Room.

They were both shot in the head and had their throats slit. Two other women who worked at New Life found them around 4 a.m., when they went to check on Ross and Belt because no one was answering the phone. They women raced to Gate 4 at Fort Campbell for help, and military officials contacted Oak Grove police. Two patrolmen on duty that night, Bobby Combs and William Sparks, were the first to arrive. A short while later, Duncan, the department’s only detective, joined them.

Witnesses described a chaotic scene with 30 or more people going in and out of the small building and possibly compromising evidence.

During open arguments for the prosecution, Miller stressed the ages of the victims. “Make no mistake, they were children.”

Women who worked for Lamb and her husband at the time, Ron Papler, split the fees they were paid, Lamb explained while testifying about the business. Half of the money went to the women and half went to the Paplers.

In a small room similar to a den at the front of New Life Massage Parlor, the men signed in with their initials and provided driver’s license numbers. Some paid in cash; others with a credit card. After a man picked the prostitute he wanted, he was taken into a room and signed a form that stated he was not paying for sex. Then the woman would undress and give the men a condom before performing sexual acts.

Some special customers, described as local VIPs, didn’t have to pay. Their names were typically listed on the bottom half of the daily log sheet. Although the Paplers didn’t charge these men, a record of their visit was recorded so the owners could pay the prostitutes.

Choking back tears, Papler confirmed that she also performed sexual acts for payment. Her prostitute name was Mercedes. All of the women had fake names for work.

In addition to alleging that numerous Oak Grove officials knew about the brothel and protected the owners, Lamb said she was paying others in Christian County to tip her off if any police agency was on its way to New Life to raid the business. This was arranged by dispatchers calling her and saying “a storm is coming,” she testified.

Defense attorneys attempted to get names of the Christian County officials from Papler, but she said she could only remember one man’s initials, “J.R.,” and another’s first name, “Tom.” It was unclear from the testimony if Papler was alleging they worked in the Emergency Operations Center or the Sheriff’s Department.

During cross-examination, Stephanie Ritchie-Mize, who represents Duncan, pressed Lamb on her treatment of the prostitutes who worked for her.

Lamb admitted the brothel was for a matter of days after Ross and Belt were slain.

“How well did you even know Gloria and Candy?” she asked.

Lamb admitted, “I didn’t know them that well.”

The first two officers to arrive at New Life after the women were attacked – Combs and Sparks – also testified. Both said they did not take gifts from the Paplers but said they knew the business was a front for prostitution.

The trial is set to resume this morning. It is expected to last until the middle or end of next week.

A former Oak Grove police officer acquitted of murder filed a wrongful incarceration lawsuit in Thursday in U.S. District Court against the of…