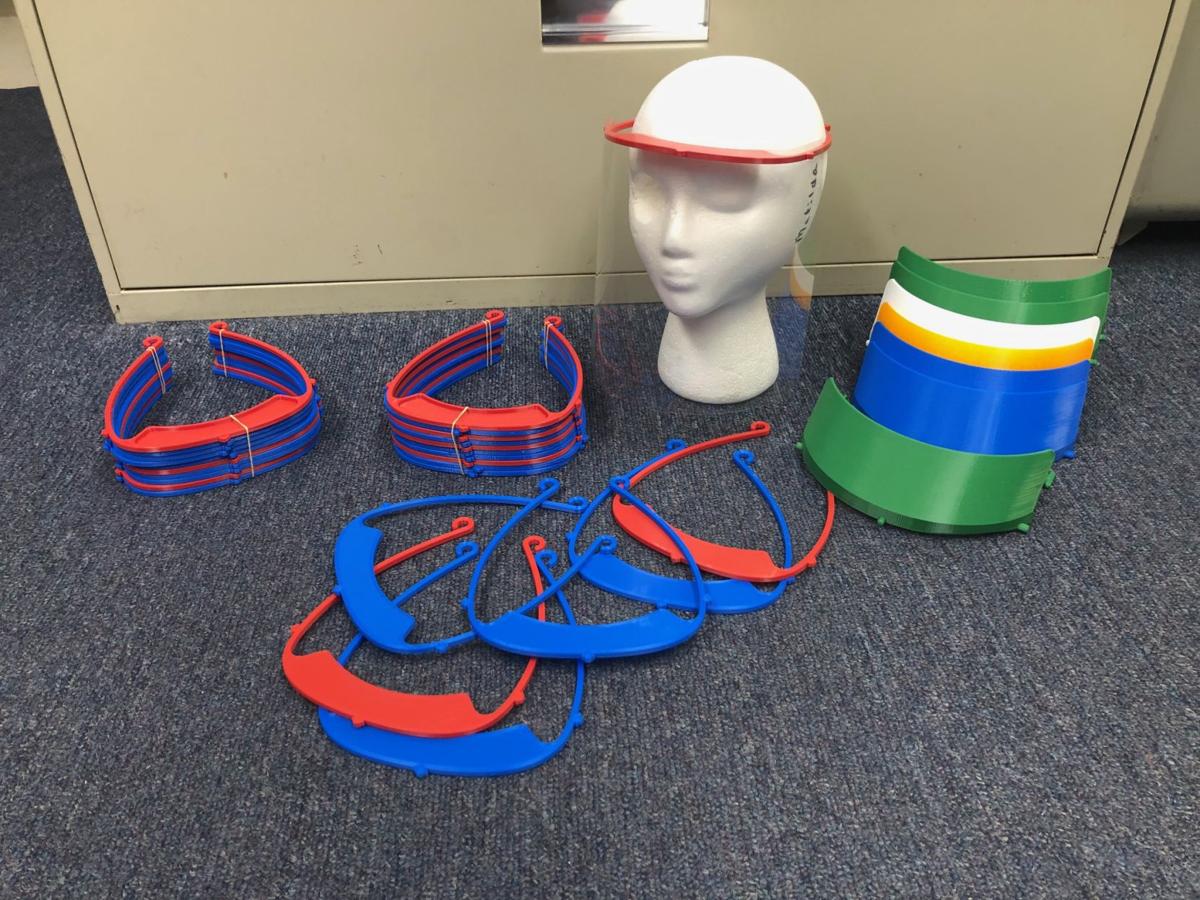 Plastic face shields are tested on a mannequin head before being divvied out among hospital staff. 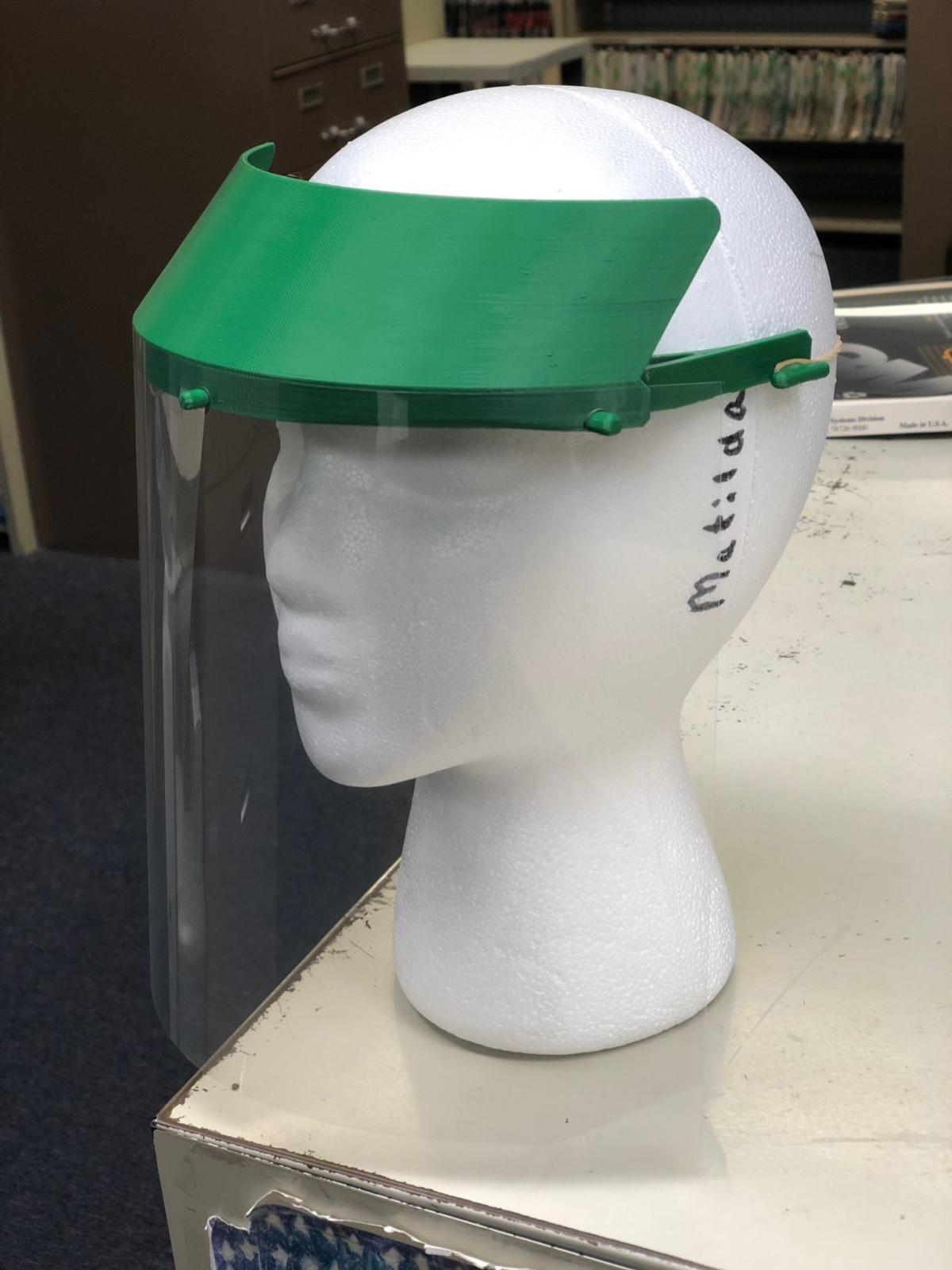 After the shield prints, a thin piece of transparency is three-hole-punched to snap into tabs on front of the shield. It can be easily removed if contaminated. 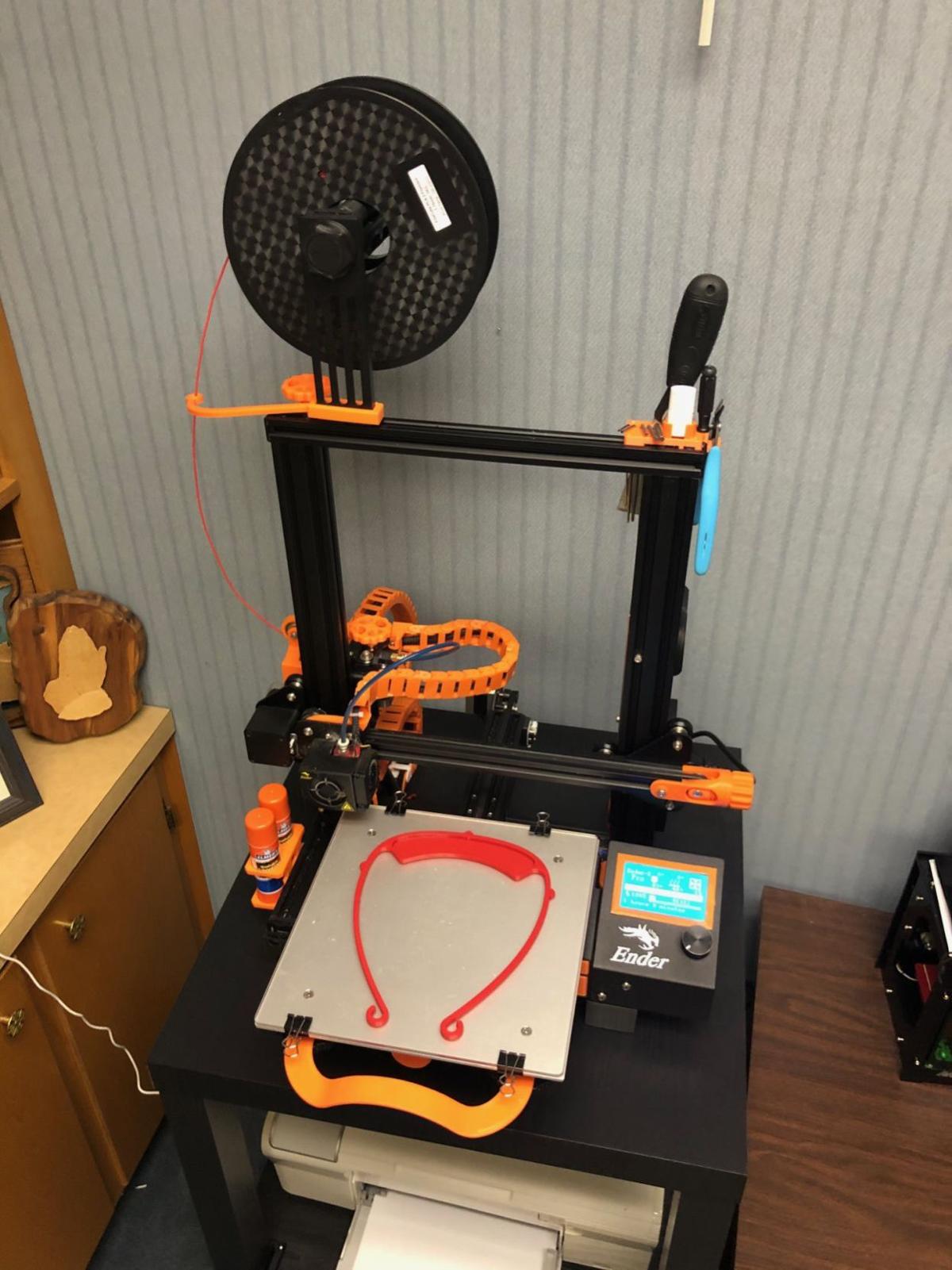 A shield sits on the 3D printer is Herrell’s office. 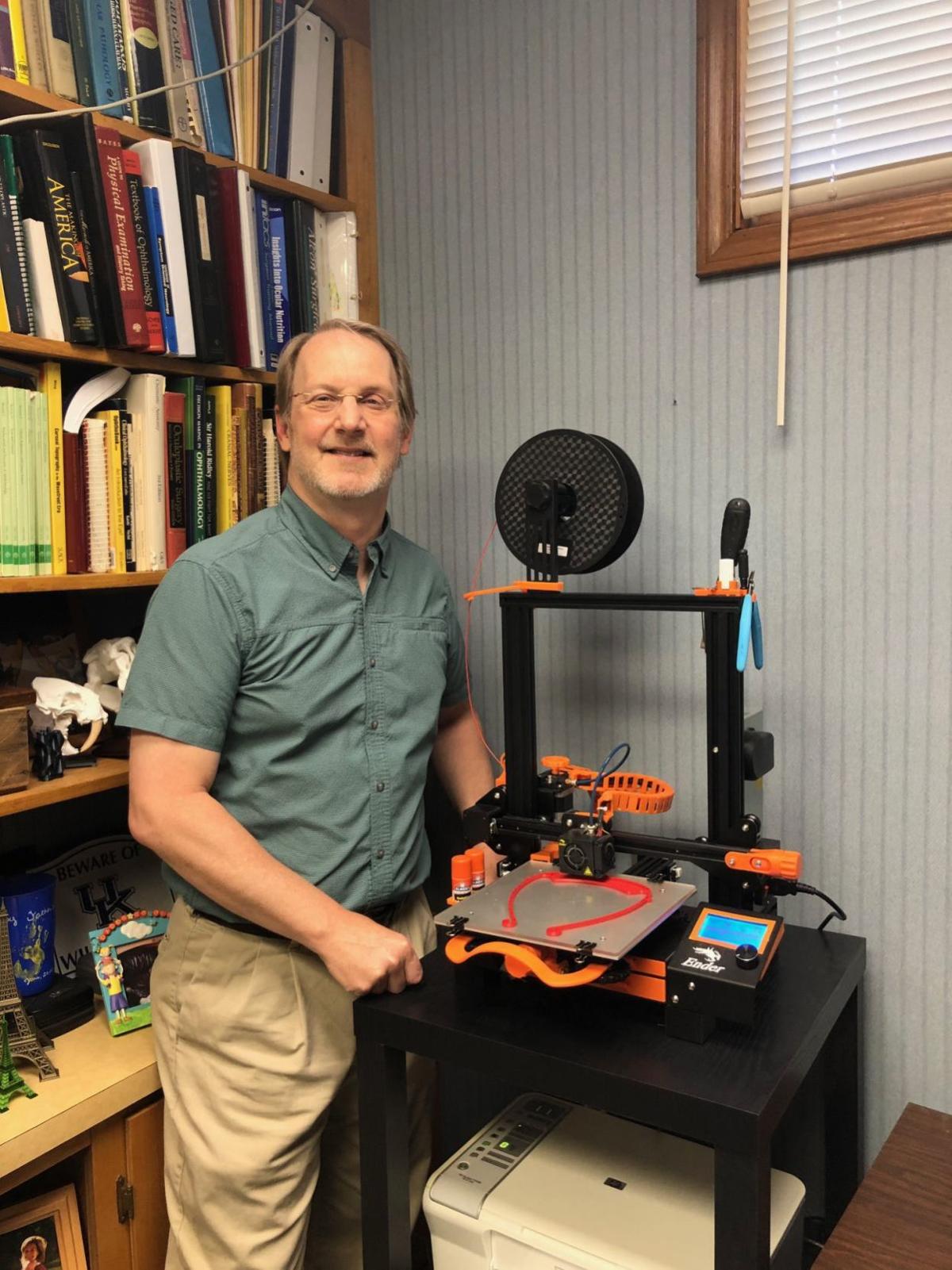 Local ophthalmologist Dr. Paul K. Herrell is using his two 3D printers to print face shields for his colleagues to use at Jennie Stuart Medical Center. So far, Herrell estimates he printed 125 face shields and can produce 30 to 40 per day.

Plastic face shields are tested on a mannequin head before being divvied out among hospital staff.

After the shield prints, a thin piece of transparency is three-hole-punched to snap into tabs on front of the shield. It can be easily removed if contaminated.

A shield sits on the 3D printer is Herrell’s office.

Local ophthalmologist Dr. Paul K. Herrell is using his two 3D printers to print face shields for his colleagues to use at Jennie Stuart Medical Center. So far, Herrell estimates he printed 125 face shields and can produce 30 to 40 per day.

Since non-elective procedures stopped in mid-March, Dr. Paul K. Herrell has been using his 3D printers to make between 30 and 40 face shields a day. So far, Herrell estimates he’s printed 125 to 150.

“I have two 3D printers and both of them have been running pretty much 24/7 for a couple of weeks,” he said in a phone interview. “I didn’t necessarily come up with this idea myself. There’s a big movement in the 3D printing community now to do this all over the world because there’s a shortage everywhere for these.”

Over the past week, Gov. Andy Beshear has made a plea to Kentuckians — individuals and businesses — to donate any personal protective equipment they can get their hands on.

“We continue to need your help,” the governor said in his daily update. “We’re calling on you to do it even more.”

PPE helps minimize exposure to hazards, like novel coronavirus disease 2019, which can be spread through particles released from people who carry the virus then sneeze or cough into the air or on a surface.

A thin piece of transparency film on the shield covers their faces and can be easily disposed and replaced by snapping it out of tabs on the front.

Herrell explained that each 3D printer is loaded with a spool of plastic that looks like weed-eater line, and the tip of the printer melts it, slowly creating the shape of the image it is set to print.

“The print head raises up a certain amount and draws it again so that it melts all that plastic together and you end up with whatever you build,” he said.

“I don’t have the capacity to do that, so I’ve been printing these because they’re quicker,” Herrell said. “Eric (Lee) said that’s one thing they’re having a hard time getting is face shields. As long as they can use them, I’ll keep printing them.”

Lee, who is CEO of Jennie Stuart Health, praised Herrell for donating the shields to the hospital during the pandemic.

“I think (Lee) has the same concern I have with us being a smaller hospital,” Herrell said. “We’re afraid we won’t have the same resources as some of the bigger hospitals do, so whatever we can do for our own community, I think it’s helpful.”

Herrell, 54, said he has been working as an ophthalmologist at JSMC for 25 years, until the novel coronavirus disease 2019 halted many of his procedures. Printing the shields is one way he can still help out.

“You think your job’s important, and then all of a sudden, you’re not working,” he said, “but you’re still part of the medical community and want to help out the best you can.”

Herrell bought his first 3D printer four years ago to take up a new hobby, but he has used it in his medical practice as well.

“When I do cataract surgeries, I’ve printed (3D) models of the devices we use during those surgeries to show the patient what we use because a lot of times the actual device is so small that they can’t see it,” he said of the enlarged prototypes. “I’ve also used it to repair our coffee maker in the office and our dishwasher at home.”

He’s even printed a Barrel of Monkeys — a popular plastic toy from the ‘60s.

“One of my associate’s here has a young daughter and I thought she might be interested in some of the nostalgic toys I had growing up,” he said.

“It’s kind of a hobby, but it’s also a useful tool,” Herrell continued. “People all over the world have basically quit printing whatever they wanted to print and are printing (face shields and masks). Hopefully I can help those that are still in the fight for COVID-19 with some of this equipment.”

And one more essential perk: 3D printers can print some of their own replacement parts.

“One of mine broke the other night as I was printing these masks, so I was able to use the other printer to print a part that had broken to fix the other one and get back to making masks,” he said. “As long as both of them don’t go down at the same time, I should be OK.”

How to donate PPE to hospitals

Personal protective equipment can be donated at Kentucky State Police posts and by calling the state PPE hotline at 1-833-GIVE PPE or giveppe.ky.gov.