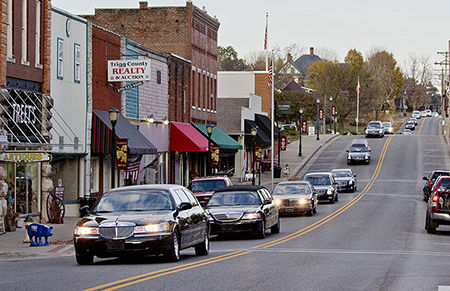 A line of approximately 100 cars snakes though downtown Cadiz on Sunday following the funeral for Lindsey, Joy and Emily Champion. The Champions were found shot to death Oct. 26 in their home on Old Dover Road. The son, Ryan Champion, was charged Friday with the murders. 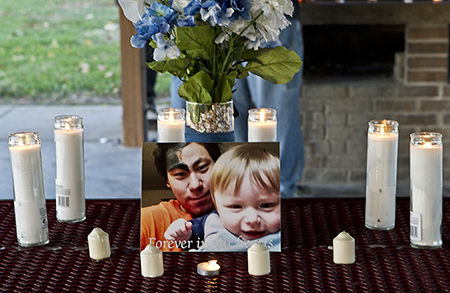 A photo of Vito Riservato with his 1-year-old son, Adrian, sits surrounded by candles Saturday during an informal memorial at Ruff Park on North Drive. Riservato was killed along with the Champions on Oct. 26. 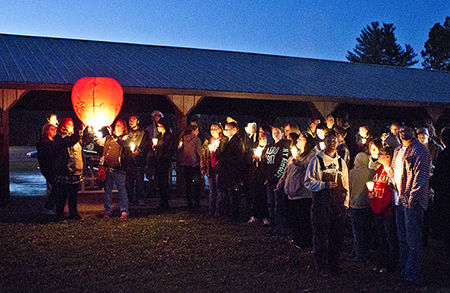 Friends gather to release a Chinese fire lantern in memory of Vito Riservato.

A line of approximately 100 cars snakes though downtown Cadiz on Sunday following the funeral for Lindsey, Joy and Emily Champion. The Champions were found shot to death Oct. 26 in their home on Old Dover Road. The son, Ryan Champion, was charged Friday with the murders.

A photo of Vito Riservato with his 1-year-old son, Adrian, sits surrounded by candles Saturday during an informal memorial at Ruff Park on North Drive. Riservato was killed along with the Champions on Oct. 26.

Friends gather to release a Chinese fire lantern in memory of Vito Riservato.

About 100 people gathered on Saturday night at Ruff Park for an informal candlelight memorial for 22-year-old Vito Riservato.

Riservato was one of four people killed in the Oct. 26 quadruple homicide in Trigg County that also claimed the lives of Lindsey Champion, 62, his wife, Joy Champion, 60, and their 31-year-old daughter, Emily Champion.

Trigg County Coroner John Vinson said that preliminary findings indicated Riservato and the Champions all died from gunshot wounds, according to the Cadiz Record.

Riservato was fingered as the shooter by the Champions’ 36-year-old son Ryan Champion — the only person to survive the massacre.

Kentucky State Police arrested Champion on Friday and charged him with the murder of his family, the death of Riservato and one count of kidnapping.

Champion’s arrest has not cleared Riservato of the shootings.

On Saturday, Riservato’s friends gathered in the covered pavilion at Ruff Park on North Drive, where they lit candles, sang songs and shared memories of their friend.

Four large Chinese fire lanterns were also lit and released. The crowd watched in silence as the red, green and blue lanterns and an American Flag patterned lantern filled with hot air and rose into the sky.

It was an informal gathering, filled with equal measures of laughter and tears as people shared funny stories about Riservato and talked about how he had impacted their lives.

Riservato was remembered as a funny guy who loved a good prank and had a fondness for random, often late-night, trips to Wal-Mart. Friends also described him as a constant source of support and a person they could always depend on to be there for them.

Many of the friends that spoke confirmed their belief in Riservato’s innocence and openly wondered how such a thing could have happened.

The memorial was organized by Skye Boyd and Nathan Boyd, who were close friends with Riservato.

Riservato and the Champions were found shot to death shortly before noon on Oct. 26. Their bodies were found in and around the Champion home at the 1400 block of Old Dover Road in Cadiz, said KSP spokesman Trooper Jay Thomas.

Joy Champion was a retired school teacher with Trigg County Elementary School, where she taught for more than 30 years. Her husband, Lindsey Champion, was retired from the Farm Credit Services Office in Hopkinsville where he had worked for 38 years. Both had graduated from Trigg County High School in the early ’70s.

The daughter, Emily Champion, graduated from Trigg County High School in 2001. She attended Auburn University and graduated in 2008 with a doctorate in veterinary medicine. She worked as a veterinarian at Baroone Veterinary Clinic in Sunset, Louisiana, where she specialized in equine care.

Riservato graduated from Hopkinsville High School in 2010, according to WSMV in Nashville. He was the father of a 1-year-old boy named Adrian.

Police have not yet determined the nature of the relationship between Riservato and the Champion family.

On Sunday, more than 350 people gathered at the Trigg County High School gymnasium for the Champion family funeral.

Lined up in a semi-circle at the back of the gym, the three simple brown wood caskets sat adorned in flowers and surrounded by photos and personal items.

For Lindsey Champion — a lover of motorcycles and classic cars — a pair of black leather riding chaps and his shiny dark red motorcycle helmet with a sticker affixed to the back that read “old coots on scoots” sat atop his casket. There were also photos of him as a young man, some Harley Davidson T-shirts and the 2013 Friend of Agriculture in Trigg County award he had been given last year.

For Emily Champion, there were dozens of ribbons she had won for her horseback riding and for her participation in 4-H livestock competitions. There were also photos of her and her smoky-grey Weimaraner dog, Skyler.

For Joy Champion, her light brown leather saddle, which is intricately embossed with flowers that resemble lotus blossoms, and a colorful horse blanket sat atop her casket. A Trigg County Public Schools polo shirt and photos of her and her husband as a young couple sat off to the side.

Before the service, a flow of people moved along the line of caskets pointing to photos and memorabilia and sometimes sharing a memory or a story triggered by an item on display.

Randall Evans, a preacher from the Cadiz Church of Christ — where the Champions attended church — started the service by sharing his memory of the last time he saw the Champions on the morning of the murders.

“Things were relatively normal at the Cadiz Church of Christ,” he said. “Lindsey was in my Bible class … he was making several comments in Bible class as he always did. Joy was busy downstairs teaching Bible class to our 10 through 12 group. Little did I know, or anyone else, what that day would bring us.”

Evans spoke of Lindsey Champion’s love of working on the family farm, his love for motorcycles and his passion for fixing up his classic Ford truck. He recalled Joy Champion as a strict teacher who wanted to see her students succeed. He mentioned her enthusiasm for doing yard work, her “secret love” of Tootsie Rolls and how proud she was of her children.

He spoke of Emily Champion’s love of animals and life, her sense of humor, her constant drive to learn and succeed and her adventurous spirit.

Butler recalled how he and Emily Champion would get bored late at night and venture out to the golf course where he worked. They would take two carts and race around all 18 holes, he said. The loser bought milkshakes afterward.

“I tell this story only because I am fairly certain that the statute of limitations has expired,” Butler joked.

There were two more speakers who spoke of their relationships with Lindsey and Joy Champion.

The fourth speaker placed an apple on Joy Champion’s casket before he spoke.

The Champions were buried at Lawrence Cemetery in Trigg County.