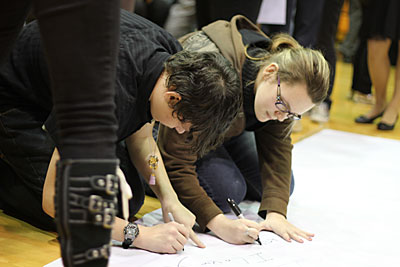 Attendees of the memorial service write notes on a large sheet at the end of the ceremony. The sheet will be hung in Miranda Campbell’s room. 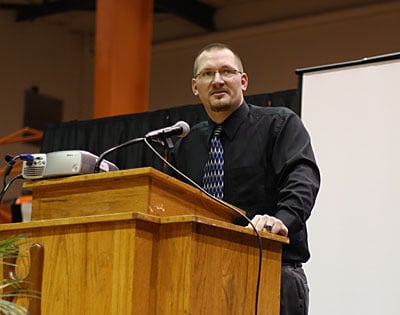 Travis Campbell, the father of Miranda Campbell, speaks during a memorial ceremony for his daughter Wednesday evening at the Hopkinsville High School gymnasium. 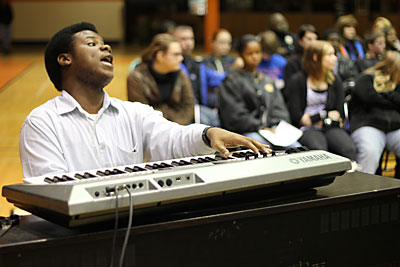 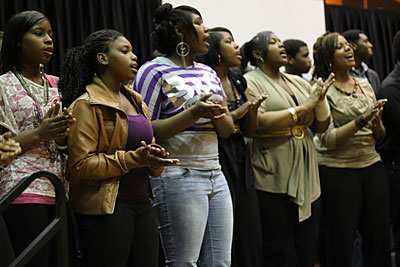 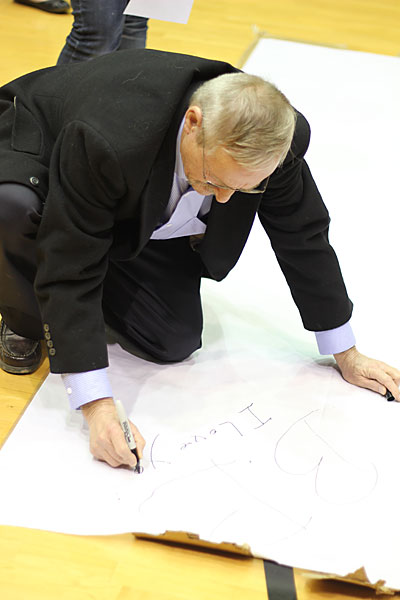 Attendees of the memorial service write notes on a large sheet at the end of the ceremony. The sheet will be hung in Miranda Campbell’s room.

Travis Campbell, the father of Miranda Campbell, speaks during a memorial ceremony for his daughter Wednesday evening at the Hopkinsville High School gymnasium.

Angela Felty can’t forget the look on her face.

Felty is the director of the Elevation Teen Center, where Hopkinsville High School student Miranda Campbell hung out most weekends. Miranda, 14, died Saturday night in Crofton. On Friday, she was at the teen center and came by the snack bar where Felty saw her.

“She would get the same thing every weekend,” Felty said. “Orange Crush. She would kind of look at you like, ‘You should know what I want by now.’ I can’t get that look out of my eyes.”

Miranda’s death from a self-inflicted gunshot wound has sparked a local movement against bullying and teen suicide. The Miranda Campbell Challenge, started Sunday by Felty and kids from the teen center, has a Facebook page with 1,129 likes from users. Many users have left supportive comments for the movement and Miranda’s family.

The school had a memorial service for Miranda in its gymnasium Wednesday night. Friends and family spoke about Miranda during the event.

Travis Campbell, Miranda’s father, said that his daughter dealt with bullying on a day-to-day basis in school, in connection to her bisexuality. Felty, who knew Miranda for more than two years, also said bullying was a factor in her life.

Both Campbell and Felty want the movement to help discourage bullying in schools and the community.

“We are going to use (the challenge) to communicate to parents and teachers in the area the price that can be paid from lashing out and bullying,” Campbell said. “We are making sure we can turn this into something positive.”

The academy also mentioned several warning signs that an adolescent may exhibit before attempting suicide, including a withdrawal from family and friends or a marked personality change. Felty said she never saw any signs that Miranda was troubled.

“She was a quiet girl,” Felty said. “She hung with her friends every weekend. There were about 10 of them that were her close friends. I never felt like I saw something personally.”

Demetria Choice, principal at HHS, also knew Miranda as well as her family. Choice described her as “headstrong” and well-liked by others in the student body.

After Miranda’s death, the school had moments of silence in her honor and prayer gatherings for students. The school’s four guidance counselors saw students throughout the day Monday for grief counseling.

Choice said the school has a zero-tolerance policy for bullying. Anyone who encounters or witnesses bullying is encouraged to notify a teacher or staff member.

According to disciplinary guidelines from Christian County Public Schools, students engaged in bullying or harassment are subject to disciplinary action including suspension or expulsion. The guidelines also state that within 24 hours of receiving a serious allegation of bullying or harassment, district personnel attempt to notify the parents of both accused students and student victims in a case.

Choice didn’t know of any instances where Miranda was bullied by other students at the school.

During the service, Miranda’s father spoke about his commitment to the challenge movement.

“I’m going to take the tenacity and perseverance that I gave my daughter and feed it into the Miranda Campbell Challenge,” Travis Campbell told the crowd. “This challenge is now my child.”

Several of Miranda’s friends also attended at the service. Dabbing away tears from their eyes, many spoke of their feelings of loss.

“Never have I ever lost a friend like this until now,” student Mackenzie Russell said at the service. “I don’t have any words to describe all of this.”

For more information about the Miranda Campbell Challenge, visit www.facebook.com/pages/The-Miranda-Campbell-Challenge/355553271130053.

Bukkying need to stop. Bullises make fun of people because in some way the person they are bulling have or possess something that the bully wants. Wether it be beauty, money, car,new shoes, clothes, brains, or etc. Bullies are usually the ones that envy you in some type of way. Maybe the suffer from some type or form of insecurities that makes them want to pick with others to put attention on someone else or to make themselves feel better. Grown women and men are still bullies. It is sad that this young lady had felt that this was the only way out. People need to get a grip on their kids and tell them this is not okay to bully other children just because. I pray that this girls family will find comfort that she is in a better place.

This is too sad. Kids bullying kids for any reason has to stop. I read an article on the MayoClinic website about this issue this morning. I was not impressed. How do we really stop this from going on? I begin to think that the kids are going to have to band together and take a stand against bullies themselves. Also, bullies have always been a problem, I wonder if it's just getting worse now or is just getting reported more. ??

We Love and Miss you Miranda all though you were not our child , we loved you like you were I am so blessed to have had you in our life for the last 4 years I will miss that beautiful smile of yours and your sweet voice saying hi mom every time i saw you .. We mill meet again my angel.. Love you Miranda...