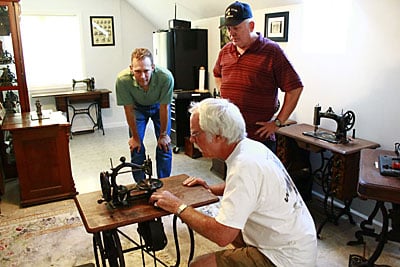 David Gillingham, Lloyd Askew (standing, from left) and Gary Wacks look for a serial number on one of Wack’s many sewing machines. 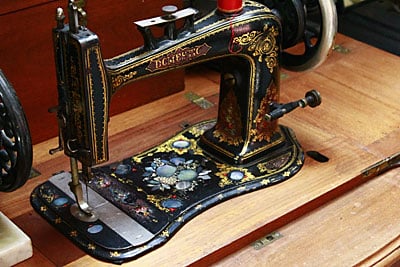 One of Gary Wacks’ ornate sewing machines is shown. Wacks has stacked up hundreds of sewing machines since he began collecting them in 1982. He estimates he has spent about $500,000 on his collection. 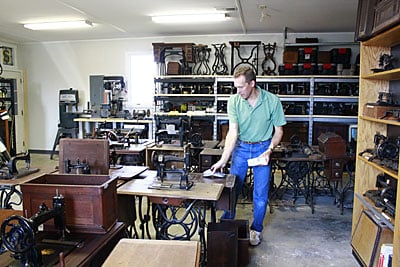 David Gillingham, 49, helps label the sewing machines in Gary Wacks’ garage. He  flew in from California to help their friend with

David Gillingham, Lloyd Askew (standing, from left) and Gary Wacks look for a serial number on one of Wack’s many sewing machines.

One of Gary Wacks’ ornate sewing machines is shown. Wacks has stacked up hundreds of sewing machines since he began collecting them in 1982. He estimates he has spent about $500,000 on his collection.

David Gillingham, 49, helps label the sewing machines in Gary Wacks’ garage. He  flew in from California to help their friend with

With a collection of sewing machines that includes more than 1,000 pieces, Gary Wacks admits that collecting is like a sickness for him.

Gary also collects toy cars, toy guns and coins, but none rivals his sewing machine collection, which he has been building since 1982. Gary, 63, has 350 sewing machines inside his house on Petsch Lane. In a garage behind the house, he has a workshop and storage area filled with even more sewing machines that he has accumulated.

“I collect everything,” Gary said. “That’s my problem.”

Most of the sewing machines have labels bearing the name of their maker and the year they were produced. Discussing his collection during a walk through his house, Gary is like an enthusiastic tour guide, eagerly listing off the pieces he owns.

In one upstairs bedroom are the only two surviving sewing machines that were displayed at the Centennial International Exhibition of 1876 in Philadelphia. Just down the hallway is a massive glass case filled with shelves of toy sewing machines, another one of Gary’s enthusiasms. In his den on the second floor is a sewing machine he brought back from the Henry Ford Museum in Dearborn, Mich., in the early ‘90s.

“Brought that one back in a suitcase,” he remarked.

Most of Gary’s machines are American models, though there are some French ones as well. Discussing the machines, he talks knowledgeably about the subtle differences in each one, giving a sense of the sewing machine’s development in the 19th and 20th centuries.

With a shelf of books on sewing machines in his study, Gary has studied the subject extensively.

“You may get one piece of information out of (the books) and you may get a lot,” he said. “There is too much to learn.”

Gary said his collection is probably worth close to $500,000, which is about equal to the amount he has spent on it. He buys his sewing machines through eBay, at flea markets, antique shops, estate sales and from other collectors.

Gary’s wife, Gloria, said when they take vacations around the country, Gary will often search for sewing machines on the trip.

Gary has also traveled to Europe to shop for sewing machines. He is a member of the International Sewing Machine Collectors Society, which helps him stay in contact with other collectors.

Gary said he values a sewing machine’s rarity over its condition.

If a machine is in bad enough shape, he will restore it in his workshop. Last year alone, he spent around $20,000 on sewing machines.

“It’s the excitement of finding something of value at a cheaper price,” he said. “You see something on eBay that is going up for auction, and you want it so bad. Then you get it and put it on your shelf. It’s an adrenaline thrill.”

Gary was born in Virginia and grew up in Dayton, Ohio. He was in the Army until 1993 when he retired from Fort Campbell. He then went to work for White Hydraulics until 2009.

Lloyd Askew, another ISMACS member from Anaheim, Calif., has collected for 20 years and has close to 300 sewing machines. Askew said Gary’s collection is one of the best he has ever seen.

“Gary’s has got to be one of the top five (collections) in the world,” said Askew, who has been friends with Gary for 20 years. “In the United States, there are maybe one or two that would even be competitive with his collection.”

ISMACS had its annual convention over the weekend in Nashville, and on Saturday, more than 100 collectors traveled to Gary’s home for a look at his collection. While very few have ever seen the collection, Gary said he is happy to show it off.

David Gillingham, who traveled to the convention from Mission Viejo, Calif., said he started collecting sewing machines in 2004 and has about 25 pieces in his collection. Seeing Gary’s collection, he said, was intimidating.

“I’ll sometimes see a sewing machine and say, ‘That’s something I haven’t seen before,’” Gillingham said. “I’ve done that about 20 times since I’ve seen Gary’s (collection).”

While he loves collecting, Gary said he hopes to stop spending so much on it as he gets older. He said he would like to display the collection in a museum, either in Hopkinsville or elsewhere in the state.

“I thought about the library (in Hopkinsville), turning that into a museum,” he said. “You can take people with other collections and combine them and use that as a showpiece to draw people into this town. I think (the collection) would be a drawing card for people.”

Thanks for sharing this post. I am very interested in this topic. I would like to share my opinion on this. womens cannabis clothing   indiscriminate; physique weight and measurement will not be an element. Curiously sufficient, extra Caucasian girls develop cellulite than Asian girls, resulting in the conclusion that food plan could have an necessary function in who develops the situation and who doesn't.

Thanks for sharing this post. I am very interested in Machine Man I would like to share my opinion on Machine Man Like most sorts of all-around stitching machines, this mannequin from brother additionally contains Best Janome Sewing Machine 2018 free arm for simpler stitching of hems and cuffs and attaching sleeves.