Emergency personnel remove the body of Gloria Ross, 18, from a massage parlor in Oak Grove on Sept. 20, 1994. 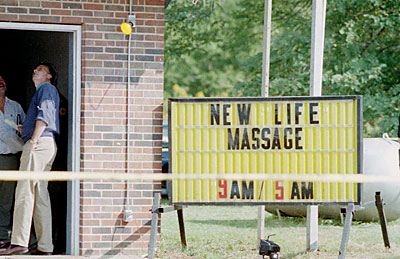 A sign outside the New Life Fitness and Massage Parlor in Oak Grove shows the business’ hours of operation as police investigate the murders of two women who worked there in 1994. The business was later revealed to be a front for a brothel. Three men have been charged in connection to the slayings.

Emergency personnel remove the body of Gloria Ross, 18, from a massage parlor in Oak Grove on Sept. 20, 1994.

A sign outside the New Life Fitness and Massage Parlor in Oak Grove shows the business’ hours of operation as police investigate the murders of two women who worked there in 1994. The business was later revealed to be a front for a brothel. Three men have been charged in connection to the slayings.

A former Oak Grove police officer pleaded guilty Monday to evidence tampering in a case connected to the 1994 double-homicide at the New Life Fitness and Massage Parlor in Oak Grove.

Facing a possible five years in prison, Leslie Duncan, 50, admitted his guilt before Christian Circuit Judge John Atkins and accepted an offer from the commonwealth’s attorney for a recommended three-year sentence.

Duncan was arraigned Sept. 21, 2012, on a charge of tampering with physical evidence in connection to the police investigation into deaths of 18-year-old Gloria Ross and 22-year-old Candida “Candy” Belt. The two women were shot and stabbed at about 4 a.m. Sept. 20, 1994, in a backroom at the massage parlor, which was later exposed as a front for a prostitution business.

Duncan, one of the first police officers at the massage parlor after co-workers found the women’s bodies, was assigned to the case.

According to Duncan’s July 2012 arrest warrant, he was accused of having “knowingly altered evidence which directly affected its reliability and availability for use in the investigation of the double-murder.”

Tammy Papler, the former owner of the massage parlor, closed up shop in 1995 after pleading guilty to promoting prostitution. She alleged that Duncan and his partner, Ed Carter, led an effort to cover up the murders.

Almost three years after the double-homicide, Papler stood up during an Oak Grove City Council meeting and said that Oak Grove police had been accepting bribes. In return, she added, she was allowed to operate the brothel without police interference.

Financial records show Duncan and Carter were paid by the parlor for janitorial work at night. In 1997, Papler told the New Era that the investigation into the homicides was shoddy and incompetent.

“The crime scene was botched,” she said. “Everyone knows when there’s a crime scene, you don’t go in and touch the body. You don’t move anything. You don’t let 20 people run in and outside a double-homicide. That’s exactly what happened.”

During a November 13, 1997, segment of the TV show “Unsolved Mysteries,” Papler and several employees of the massage parlor alleged that the officers were using them and threatened them if their girls didn’t do what they wanted, including performing sex acts.

This is not the first time that suspicions have arisen about Duncan’s handling of a crime scene. A detective from Montgomery County, Tenn., claimed Duncan’s investigation into the 1992 murder of another woman, Manuella Scarlett, undermined that case as well.

“The way (Duncan) handled, it jeopardized the investigation,” the detective told the Associated Press in 1997. “I don’t know if that’s the way they do their job, of if they were trying to hide something.”

The investigation into the double-homicide in Oak Grove was later handed off to the Christian County Sheriff’s Department. In 2006, Kentucky State Police took over the case, and after nearly 18 years, police made their first arrest in the case when they charged Duncan with evidence tampering.

Six days after the Oak Grove murders, Carter’s wife filed a domestic-violence complaint against him. He resigned from the force a month later.

In the years following, Duncan worked as a security guard at a discount store in Tennessee.

Out on a $20,000 bond since last October and monitored on a GPS ankle bracelet, Duncan, through a lawyer, previously asked to have the ankle monitor removed, but Commonwealth’s Attorney Lynn Pryor objected.

“It’s a serious case in a murder in which he was an investigator,” she argued. “I think all of that should be taken into consideration.”

The murders of Ross and Belt have never been solved. Duncan’s formal sentencing is set for Nov. 5.