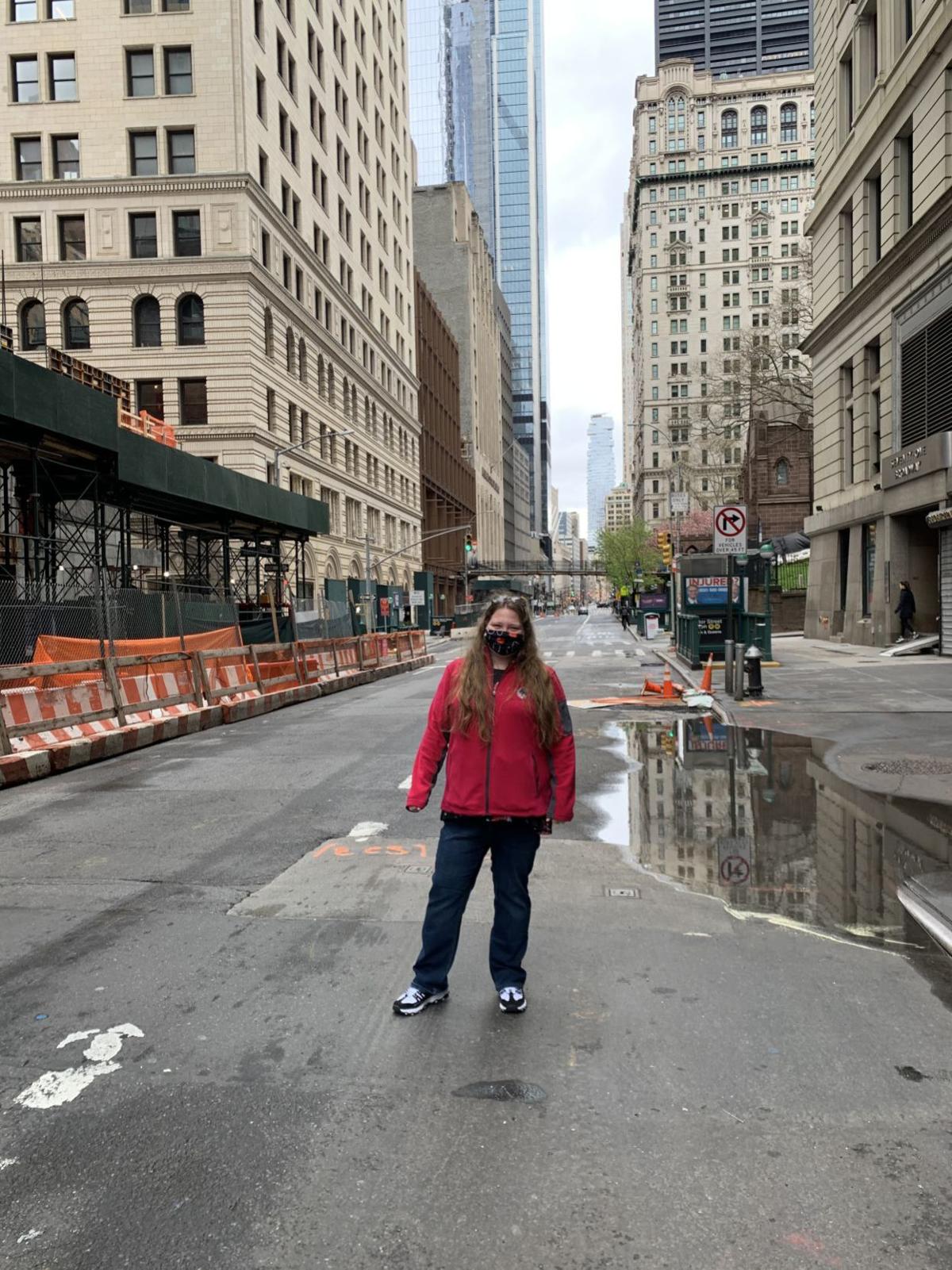 Sarah Sullivan stands on an empty New York City street while in the city working as a trauma nurse during the COVID-19 pandemic. 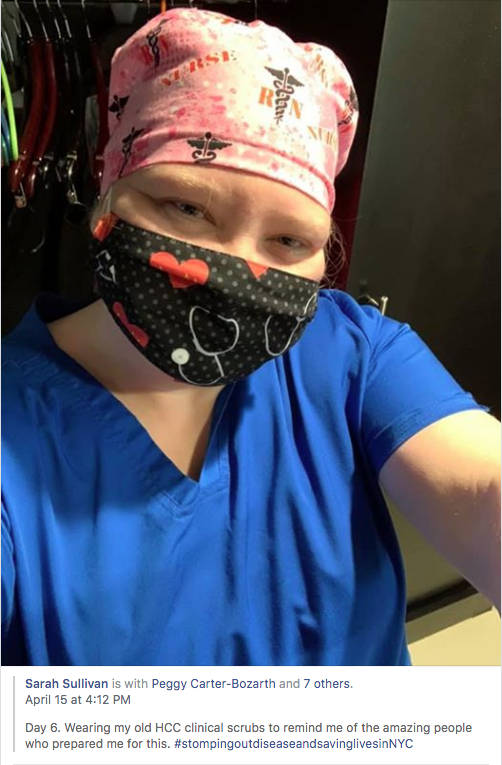 While working on the COVID-19 front lines in New York City, Sarah Sullivan shares via Facebook that she is wearing scrubs from her clinical classes at Hopkinsville Community College. Sullivan graduated from HCC’s nursing program in 2016 and will graduate in June with a Bachelor of Science in Nursing from Austin Peay State University.

Sarah Sullivan stands on an empty New York City street while in the city working as a trauma nurse during the COVID-19 pandemic.

While working on the COVID-19 front lines in New York City, Sarah Sullivan shares via Facebook that she is wearing scrubs from her clinical classes at Hopkinsville Community College. Sullivan graduated from HCC’s nursing program in 2016 and will graduate in June with a Bachelor of Science in Nursing from Austin Peay State University.

Sarah Sullivan, who graduated from HCC in 2016 while her husband was stationed at Fort Campbell, and Ashley Rogers Kitchens, a 2012 HCC graduate, just happened to be working at the same field hospital in Queens last month.

Kitchens could not be reached Wednesday for comment, but the ladies’ former professor found out they were both working at the Billie Jean King National Tennis Center field hospital when she reached out last month.

“They were working together and didn’t know one another at all,” said Joyce Lambruno, nursing division chair at HCC. “They didn’t know each other, but then fate put them together.”

Sullivan, 39, is working as a Level 1 trauma nurse on contract and recently shared a photo of herself working at a hospital in the Bronx. She tagged several HCC nursing professors who helped prepare her for the field.

“Wearing my old HCC clinical scrubs to remind me of the amazing people who prepared me for this. #stompingout diseaseandsavinglivesinNYC,” the April 13 Facebook post read.

Sullivan said in a phone interview Wednesday that the opportunity to work in New York City happened fast.

“I had just driven to Michigan to get my niece,” said Sullivan, who has four children with her husband, who is now stationed in Fort Bliss, Texas. “We got back on April 5, which was a Sunday, and I had an email from a contract company I had done some work with in the past asking if I’d be interested going to work in New York.”

After a quick talk with her husband, Sullivan was on a plane to the Big Apple three days later.

Since landing in NYC, Sullivan has seen a little bit of everything.

“Recently it’s been a lot of COVID-positive patients and people with all the trauma related to that,” she said of the hospital emergency room. “We’ve had a lot of (vehicle) accidents (victims), people who have been drugged or stabbed, and a lot of those are also COVID positive.”

Prior to working in New York, Sullivan did clinical training at Jennie Stuart Health, worked in critical access ER in Ashland City, Tennessee, worked at Tennova Healthcare in Clarksville, and worked as a contract nurse in other states.

“The best part about nursing is there is always something different you can do,” said Sullivan, whose parents and sister are also nurses. “I love the ER, like absolutely love it.”

Lambruno said the two-year associate nursing program at HCC provides aspiring nurses with a variety of opportunities in clinical settings, such as training at Jennie Stuart Health and Western State Hospital and learning community health through the maternal newborn course with Christian County Health Department.

“We also do a clinical rotation at Vanderbilt Monroe Carroll Children’s Hospital to prepare them for a teaching hospital,” Lambruno said. “They get exposed to all sorts of medical student training that they don’t have at our local hospitals.”

After graduating from HCC, Sullivan went on to pursue her Bachelor of Science in Nursing from Austin Peay State University. She is set to graduate in August and plans to begin the master’s program this fall.

In New York, Sullivan is working 12-hour shifts, seven days a week. Many of the COVID-19 patients she’s seen have been young adults, some suffering from the common respiratory ailments brought on by COVID-19 while others are experiencing micro-clotting from the virus, which can lead to heart attacks.

Sullivan said epidemiologists who are studying COVID-19 believe the virus has mutated as it traveled from country to country, and the bout that made NYC a COVID-19 hot spot possibly came from Europe.

“When this first started (in New York), there were cases of 300 people being intubated a week and many of them didn’t walk back out of the hospital,” Sullivan said. “Now, it’s more like 12 (a week being intubated).”

Sullivan said she believes New York City residents heeded stay-at-home orders and flattened the curve, but she doesn’t believe anyone is in the safe zone yet.

“From a nurse’s perspective, things opening back up do not mean that the pandemic is over. It means we have an ICU bed available for you,” she said. “Flattening the curve was never about getting rid of the virus. It was about making sure health care could catch our breath. We’re going to see thousands of more cases.”

Sullivan’s contract is up May 30, but she plans to stay longer if needed.

Sullivan said the hardest part of her job is seeing patients who are isolated from their families at the end of the road.

“They are alone and they are scared and things are going pretty badly,” she said. “That’s rough for me. I want to be a presence for them, so I hold a lot of hands and I just try to maximize the time that I do get to spend with them.

“It’s hard, especially the ones who can’t breathe and they’re being vented, and the only people around them are all in gowns and gloves and masks,” she continued. “Even though I have to look at them through a face shield, I try to make sure they can see my face. Sometimes it’s really as simple as holding a hand.”

Sullivan said she is leaning on the education she received at HCC daily, specifically the importance of safety.

“I don’t think I’d be able to survive out here if I didn’t have my classes at HCC,” she said. “The biggest thing they teach us is safety, how to be safe as a nurse and how to keep the patient safe — we had a whole period where we had to learn how to put on and take off (personal protective equipment).”

Lambruno said the fundamentals of nursing is basically the first class nursing students take. They learn about infection control and sterile techniques.

“From day 1, we try to incorporate skills that they learn so one skill will build upon one another,” the nursing director said. “They’re constantly reminded of the processes that they are learning throughout the program.”

“She never really said anything. There was just a nose wrinkle that she did, and I would know that I was doing something horribly wrong,” Sullivan said laughing. “Every time I’m putting on or taking off my PPE, I still see the nose wrinkle.”

Along with the mental notes, Sullivan has the nursing pin she received when she graduated from HCC with her in NYC.

“I don’t think any pin will ever mean as much to me as the one from HCC,” Sullivan said. “I don’t like to wear it because I don’t want to get the COVID on it, but it’s a reminder of where I came from.”